"What can Obama and congressional Democrats do about the bad economy?
Friday’s job growth numbers, reported by the Labor Department, present a sobering picture for President Obama and the Democrats. With the pace of hiring down and the unemployment rate above 9 percent, the report suggests that the nation’s recovery is once again faltering. These numbers only underscore our continuing economic difficulties. And for a mix of political and policy reasons, the federal government has no significant new fiscal or monetary weapons left to deploy. As they head into an election that is certain to focus on the economy, the administration and congressional Democrats have no choice but to put the best face on a bad situation. What can they do?"

From The New Republic

"...They needed to create jobs. Very frankly we've been here for four months without jobs legislation being offered on the Floor of the House of Representatives. What we're rolling out today as we talk about creating job is a focus on job creators...

During the 2012 general elections both presidential and Congressional, Democrats won’t be judged or blamed for the condition of the economy, when they won complete control of the Federal Government in 2008. At least by Independent voters. They’ll be judged by what they’ve done since. Especially the President and the job he’s done with what most people would say was a bad hand when President Obama took over in 2009.

So especially with the bad jobs report Friday, with another increase in the unemployment rate of now 9.1% and only roughly 60,000 jobs created in the private sector. What democrats have to do is to communicate an economic message that tells the country: “we know the economy is bad and we have a plan to address it that will create economic and job growth. That will bring the unemployment rate down to a more acceptable level.” Even if they have no shot at passing that through the GOP lead House. But at least have something that they can take on the campaign trail in the 2012 general elections.

Democrats should say: “look, we have an economic agenda here. We tried to pass it out of the Senate, but the Senate GOP Leadership blocked it. Which is why you should reelect us there and gives us more seats in the Senate. But besides the House GOP would never pass it anyway.” And take that to the country.

Unfortunately there’s not much the Federal Government can do right now. The Federal Reserve has brought interest rates down as far as they can go. So the options are limited, but I believe good and good enough. But I believe an economic agenda that’s built around infrastructure, energy, trade and education, is the way forward for Democrats.

Especially as the GOP will focus on more tax cuts, deregulation and deficit reduction, Democrats should have an economic agenda that’s about infrastructure investment. The Core of Engineers says we need around 500B$ of infrastructure repairs. Something like a National Infrastructure Bank that would pay for itself, would take care of this and put hundreds of thousands of people back to work. energy a national energy policy that moves us towards energy independence and off of foreign oil. By promoting our own vast natural resources. More foreign trade that gets our products sold in foreign countries and brings down our trade deficit. That has trade adjustment assistance for people who lose their jobs as a result. So they can go back to work. And finally last but never least, education reform that’s built around public school choice and rewarding teachers for their quality of service, not time of service.

I believe with rising unemployment with weak economic and job growth, the strategy of no, saying no to whatever the House GOP comes up will run dry. At some point before the 2012 general elections, Democrats especially the President, are going to have to develop their own agenda. Because they are on the hook for what’s gone on the last four years for good or bad. And will be held accountable for it.

The issue that House Republicans will be facing in 2012 as well is that they’re the incumbent party in the House of Representatives. And will also be judged by what they’ve done in the last two years as well. So both parties, have incentives to show they can lead the country. And give voters reasons to vote for them.

Posted by Erik Schneider at 5:16 PM No comments: 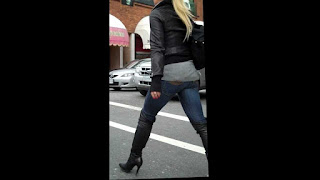 Source:IBOB 1983- Sexy Blonde, in jeans in boots. She obviously understands winter fashion.
Source:The Daily Press
“Blonde girl in jeans and nice boots”
From IBOB 1983
Here’s a tall gorgeous curvy sexy blonde that proves that the myth that all blonde women are rail-thin is a myth. Yes, blonde women have curves as well and this blonde is proud of hers and showcases them very well. In her tight denim jeans in leather boots. As well as a leather jacket. Gorgeous sexy woman that’s very proud of how she looks and wants the world to see it.
Skinny women to me aren’t sexy. I’m not interested in stereotypical valley girls or stereotypical rail-thin models. I’m not interested in obese women who’ve never missed and opportunity to eat or never turned downs seconds as well. I’m interested healthy women, women who take care of themselves. Who eat well, balanced meals who work out as well, who take care of themselves.
Healthy women to me are sexy women as you see in this video. Beautiful sexy woman in a very sexy outfit that combines both worlds of leather and denim into one very sexy package, a pleasure to check out. Tall gorgeous sexy blonde because she takes care of herself and is proud of that and lets the world see how healthy she is.
Posted by Erik Schneider at 4:35 PM No comments: