NBC News: John F. Kennedy on Meet The Press Through The Years 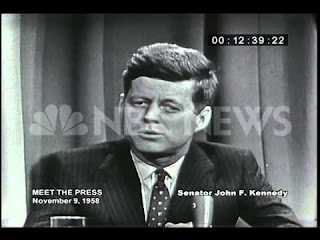 This piece was originally posted at The New Democrat

John Kennedy, was perfect for NBC's Meet The Press, because he was so quick. The people there liked him and knew that he could not only answer their questions, but wanted to do it and answer them with depth. Very similar to Bill Clinton or Barack Obama, he was very quick off the cuff and could answer questions with humor. Meet The Press liked interviewing him, because he was likable, popular, well-known and very funny. The 1950s was a fascinating time and JFK was in Congress the whole time as the country was dealing with the Cold War, post World War II economic boom, the early days of the civil rights movement and even American women starting to make important impacts out of the home in the American economy. Meet The Press had female anchors and questioners. There were women in Congress like Senator Margaret Chase Smith and many others. Jack Kennedy was in his thirties and early forties during this decade and had a great future ahead of him if he wanted it. Which is why Meet The Press loved having him on.

Jack Kennedy, was sort of an absentee Representative in the House. Somewhat bored and loved being a bachelor and enjoying the Washington nightlife when Congress was in session. It wasn't until JFK decided to run for the Senate in 1952 that he started taking his job more serious and making his positions known in Congress. There are a lot of things to love about Jack Kennedy and he is my political hero, but he's definitely someone who grew in office. Wasn't a great Representative, but a good Senator at least in the sense that he started taking issues seriously and studying them and not just going to his committee hearings, but knowing the right questions to ask. I don't believe JFK becomes President of the United States on his personal appeal and family name alone in 1960, had he not become a serious Senator and taken his job in Congress seriously and getting on the road and getting his political platform out there.

I'm not sure JFK gets into his politics without his father Joe pushing him. But it's clear that once JFK got into politics and ran for the House in 1946 and was elected he loved it and became a natural campaigner and politician. He gave a great speech, great interviews, knew how to excite and inspirer people. He wasn't a natural public servant and someone who actually loved doing the job that he was elected to do. He tenure in the House is a pretty good example of that. I believe he sort of grew in public service once he was elected to the Senate, especially his second term when he started considered running for president in 1957 or so. But was someone even though had a fairly thin resume outside of Congress and somewhat of a thin voting record and list of accomplishments in Congress, was someone who was great at expiring people and laying out a vision for how America could be even greater and how all Americans could succeed in America.

Posted by Erik Schneider at 6:43 PM No comments: