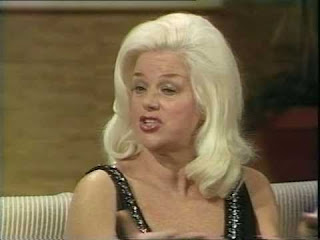 Source:The New Democrat
“Chat show legend, Des O’connor, CBE discusses ‘Soap Operas’ with Larry Grayson, Diana Dors and comedian Bernie Winters. First transmitted on the ITV network 02/04/1984. Follow us on Twitter."
From Thames TV
Diana Dors is so freakin adorable and then throw in the fact that she’s so funny as well, which I think gives you a great idea of how good of an actress she really was. She was playing comedian on this show and doing it without a script.
Larry Grayson was a British comedian and I imagine a pretty good at that, even though I’m not that familiar with him. And they obviously knew each other very well. But he’s a comedian, his show is supposed to be funny similar to The Dick Cavett Show and he brings Diana on and she plays the role of comedian.
She wasn’t playing the straight woman lets say to Grayson’s funny man and he wasn’t playing the straight man on this show either. They were both very funny and talking about things they’ve worked on and what they have in common. And the chemistry between them was great and it made a for a funny interview. If you want to call it an interview.
Posted by Erik Schneider at 3:43 PM No comments: