McFadden: Raquel Welch On Her Life, Career and Philanthropy 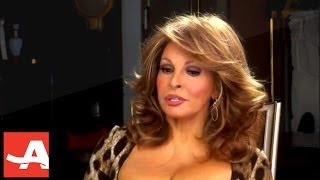 McFadden: Raquel Welch On Her Life, Career and Philanthropy

Raquel Welch, really is a true goddess. A women now in her early seventies is still this hot, cute and sexy. Who is also a hell of an actress and entertainer in general, who is not just about her hot sexy looks. But had made a great career with her looks, but ability to act and entertain as well. She’s someone who was born with goddess looks and features, which probably got her in the door in Hollywood and got her a lot of work early on.

But I sort of her look at her like I look at a great talented athlete who gets noticed real quickly, but then takes full-advantage of that and make a great career for them self. Raquel, is a very good actress whose used her physical talents, lets say to get herself parts and work, because directors want to work with her and use her. Because they know she’ll sell their movies and projects. But then does a great job in the roles that she gets. Because guys simply want to see her, but then they also can see that she can act, sing and make people laugh as well.

Raquel Welch, has truly made a great life and career for herself as a Hollywood goddess. Showing women of all sorts of backgrounds that if they work hard and take care of themselves and are responsible, they to can make a great career and life for themselves. Perhaps not age as gracefully as Raquel, but age well and not have to look like a senior citizen even if they already are one in years. The old cliche, “age is only a number”, could have been written for Raquel.

She’s not someone who was discovered in her twenties, but then burned out in her thirties, or dead in her thirties. She’s someone if anything is doing better now in her seventies than she did in her thirties. In some ways perhaps even sexier with great curves now. A women at her age whose still a sexy baby, a hot baby-faced adorable women, in her seventies. Who can probably make women young enough to be her granddaughter jealous. Only a goddess, or some made up Hollywood figure could still have that at this point in their life. But Raquel is the real thing who fully taken advantage of all of her abilities.

Posted by Erik Schneider at 4:48 PM No comments: