"The debate over Central Banking and the Big
Government that naturally accompanies it is
as old as our Republic.  In this scene, Thomas
Jefferson argues against a Central Bank and a
powerful central government and for an
economy based on Freedom.  Alexander
Hamilton argues for a Central Bank, a national
debt-based economy and federal government
authority.  This same debate continues today!"

The United States Constitution is there to protect Americans from statists on the Far-Right and Far-Left. Who would otherwise ignore the Constitution because they believe government knows better than individuals themselves how Americans should live their own lives. The U.S. Constitution and our constitutional rights, are there to protect our freedom especially our privacy and our ability to make our own decisions in lives from a big government that believes that people are essentially stupid and need a big government to babysit them. Tell what to do and how to do it, that doesn’t trust people with their own lives.

As Jefferson put it the biggest dangers to freedom in America is a government and people in government who ignore the Constitution. Or perhaps just look at it as an advisory document, or playbook that politicians and other government officials can go to in order to decide what to do and what decisions to make. And that they can ignore it and when they disagree with it. But the thing is America is a constitutional federal republic and we’re not a social democracy where people can lose their rights because a simple majority views them as unnecessary and gets in their way of their big government vision.

A big difference between the American constitutional federal republic and liberal democracy from lets say an unitarian social democracy like Britain where so much power is centralized with the national government, is that Americans can’t lose their freedom and constitutional rights because the current government, or administration, Congress, view them as dangerous, or they become unpopular. Our constitutional rights and freedom are essentially guaranteed until we lose our freedom by hurting someone else’s freedom like an innocent person, or we take the life of an innocent person. But we can’t lose them because big government statists believe they interfere with their big government collectivist agenda.

Minister Malcolm X: On The March On Washington (1963)

In this speech, you can definitely see the difference in methods and strategy between Malcolm X and Dr. King. Dr. King understood that for African-Americans to get their freedom and equal rights under law, they would have to work with members of the majority population, (meaning Caucasian-Americans, especially Anglo-Saxons) to get those civil rights laws passed.

Whereas Malcolm X, at least early in the early 1960s, saw that as treasonous to work with what he would called the "White man". That African-Americans should already have their freedom and equal rights. And that the United States Government should just give those things to the African-American community.
Dr. King was smart enough as the brilliant leader that he was to know that those things weren’t going to just be given to his community. Especially by racist Southerners in Congress and at the local and state levels in Southern states. That they would have to fight and work to get them and go over the bigots heads and work with non-racists in the Caucasian-American community.

The March on Washington, was very successful, despite what Malcolm X said. Because in that speech, Dr. King lays out the whole vision of the civil rights movement. Dr. King was talking about an America, where his children and all children aren’t judge by the color of their skin, but by the content of their character. Where all men and women are equal under law. And not treated better, or worst simply because of their color, or race.

Dr. King's vision was obviously not good enough for Malcolm X and his supporters and the broader Black Power movement and the New Left that emerged in the late 1960s, that was against the War in Vietnam, but the American capitalist economic system and the power structure in general. The broader Black Power movement and New-Left were revolutionaries. They didn’t believe in working with others to get what they want. But that they should just simply take what they want.

Dr. King and Malcolm X, represent not just two wings of the civil rights movement of the 1960s, but two era’s as well. Dr. King, represents the 1960s, when these laws were passed that he had a lot to do with the passage of those laws. Because he understood like a good politician does, that you have to work with others to get laws passed and get new policies.
Malcolm X, represents the post-civil rights movement, the vision for how African-Americans not only have equal rights under law, but an economic vision for how the community can succeed in America built around education, economic development, and personal responsibility in the community.
Posted by Erik Schneider at 3:28 PM No comments:

I gotta admit, the first twenty minutes of this movie is very slow. Just as slow as the small Nevada town that it takes place in. That the natives in this movie seem to want to escape. Except for the first few minutes of Dean Martin when he’s performing in Las Vegas and he’s doing his musical comedy routine. But Dino comes back into the movie as someone whose just passing through town on the way to Los Angeles. And his car gets stuck there, or that is what the mechanic tells him. And one of the locals just happens to be there to put him up for the night. I guess that is what they call small town hospitality.

Dean Martin and Kim Novak, really are the whole movie. At least the good watchable parts of it. Felicia Farr, looks great in it as well and also looks great in it. But the Ray Walston character, the jealous husband, but that is because he is way out of his league and over his head. Married to a women played by Felicia Farr, who looks like a Las Vegas showgirl or performer, living in the middle of nowhere. Between Smallville and Tinyville. Who married way down to a guy whose a wannabe songwriter who makes his living giving music lessons from his home. To the five people in town who want to learn music. Whose always worried about losing his gorgeous wife, because he’s not good enough for her.

Kim Novak, is her usual hot sexy baby girl adorable self. Only this time she plays a women who seems to know what she wants and where she’s going. Who has a healthy amount of self-esteem. During her career, she tended to play women who lacked self-confidence and never sure if they were good enough. Not that much different from the real-life Kim Novak. The video on this post pretty much lays out the plot and what it’s about. I’m not sure I can add anything to it without sounding repetitive. But all the characters except for the Felicia Farr character, who might be the only real person in the movie, want Dean Martin for something. Which is to make it big and leave their small town life. 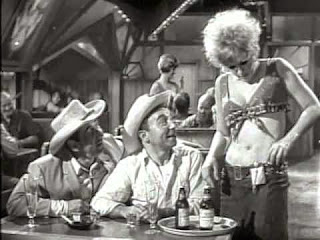