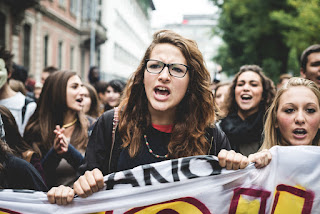 This piece was originally posted at The Daily Review: New America Foundation: Double Take- Speaking on Freedom of Speech

At risk of sounding like a nationalist, but people right and left have debated whether America is exceptional or not the last ten years or so and debating what is called American Exceptionalism. Is America an exceptional place or not and if we are, are we exceptional in a positive sense. Do we represent as Americans the right values or not. Our First Amendment which of course is our guaranteed constitutional right to Freedom of Speech, is one example of why we are exceptional. Along with our diversity which is across the board and our other guaranteed civil liberties and constitutional rights.

No constitutional right is absolute and that includes both the First Amendment and the Second Amendment. But what it means is that Americans essentially have unlimited free speech and free expression rights and basically and unlimited ability to express ourselves and how we feel about things, places, issues, culture and even people. Short of inciting violence, violently harassing people, or falsely libeling people. And then others have the same right to express how they feel about us. Which means Donald Trump can run his nonsensical reality show disguised as a presidential campaign and say all sorts of garbage about groups of Americans. And the rest of the country has the same right to express out they feel about The Donald. The Captain of Reality TV.

Free Speech, is not a threat to America. The opposite is the truth, which is fascism in the form of political correctness, whether it comes from the Far-Left or Far-Right. That says the political correctness warriors knows best what is acceptable and unacceptable speech. And they’ll decide what people should think and what we can say. You can’t have a liberal democracy without free speech and a liberal right to free speech. Put all the views out there and then let the people weigh in on what the speakers and thinkers are saying. Correct the falsehoods, reward the truth tellers and critique the liars. That is how liberal democracy and free speech works. Instead of having some Board of Experts deciding what is appropriate and improper speech in a developed society.

Posted by Erik Schneider at 1:19 AM No comments: