The Washington Post: Opinion: Michael Gerson: Are Democrats Stuck in 1979?: How The Democratic Party Has Changed 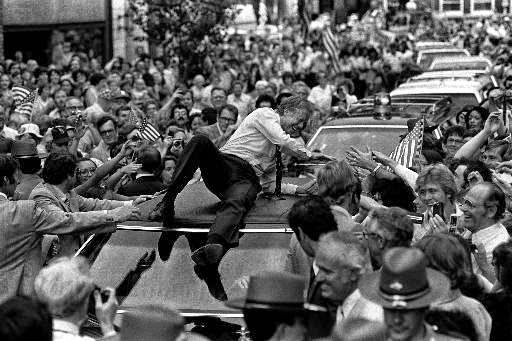 The Washington Post: Opinion: Michael Gerson: Are Democrats Stuck in 1979?

Just to answer Mike Gerson’s title of his column, no. Democrats are not stuck in 1979, but some are. Pre-1976 and why the Democratic Party lost back-to-back presidential elections in 1968 and 72 and in 72 Senator George McGovern loses to President Richard Nixon in a landslide, Democrats were seen as what would be called redistributionist, welfare statists Social Democrats that would be more into government dependence and redistribution to help people in need and to try to make the economy more equal. Than to empower people at the bottom and near-bottom with things like economic growth, job creation, job training and education. So they could get ahead in America as well.


Jimmy Carter comes along in 1976 and tries to change how the Democratic Party was seen and no longer make it look like a big government welfare statist party that it was seen as before. He had limited success obviously as a New Democrat, but he had a social democratic, Democratic led Congress to deal with. That had large majorities to deal with in both the House and Senate, all four years as President. Which meant if President Carter wanted to get any of his more new democratic proposals accomplished, things like welfare reform and what would become the Affordable Care Act in 2010, trade, deficit reduction, he had to work with Congressional Republicans. Without losing too many Democrats especially in the leadership.

The Democratic Party post-Jimmy Carter would lose too more landslide presidential elections in 1984 and 88. Why, one because they were running against Ronald Reagan in 1984 and Americans started feeling good again. But two, they were still seen as a social democratic McGovernite party that they were seen as in 1972. The Democratic Party of 1968 and 72 was much further left than the LBJ Great Society Progressive Democrats of the 1960s. The New Deal/Great Society Progressive Democrats of the 1930s and 60s, were now replaced with McGovernite New Left Democrats that is known as Occupy Wall Street today. That sees Bernie Sanders as their hero and perhaps Elizabeth Warren. But not Barack Obama, Bill Clinton and Hillary Clinton.

When it comes to rhetoric, President Obama is further left than President Bill Clinton and certainly Hillary Clinton. Who I believe in Hillary’s case may be to the right of her husband rhetorically. But their policies when it comes to crime, trade, foreign policy, national security, civil rights, fiscal policy are fairly similar. Barack Obama at times at least may sound like a Elizabeth Warren Progressive, but he governs like a New Democrat. Which is how he ran for president in the 2008 general election, how he’s governed as President and how he ran for reelection in 2012.

As much as Republicans and perhaps even Mike Gerson, who tends to be much smarter than this, but as much as they want to paint Barack Obama as some New Left or Far Left Social Democrat or something, he’s not. I mean why do you think his so-called progressive base is not happy with him? Why do you think they were disappointed with him in his first term and still are today? Because they thought he was one of them. A Dennis Kucinich or George McGovern or Bernie Sanders. People that far to the left can’t get elected President of the United States. Barack Obama is a center-left moderate to liberal-progressive president, who is not far enough to the left for me on social issues. That is how he has governed, because that is who he is.

Posted by Erik Schneider at 3:56 PM No comments:


Source:The New Democrat
“Susan Atkins is terminally ill and dying of brain cancer and has only 6 months to live. This interview was done in 29002 but James whitehouse gives his first interview in mnay years. This was on GMA yesterday:The Manson Family Today."
From ABC News

I think it is pretty sad the way that Susan Atkins died in prison, especially from brain cancer which must have been horrible for her. And I’m not sure she did turn her life around, because I’m not sure life was ever-moving in the right direction in the first place to end up where she did.
Susan Atkins did build a positive life for herself in prison as far as how she did her time and how she helped fellow inmates and helped people on the outside. Life in prison doesn’t have to be and shouldn’t be torture. Other than the fact that you know you’ll never be free and you’ll always be incarcerated. Which is bad enough and shouldn’t be any worst than that if the inmate does their time well and doesn’t further their criminal career inside of prison.
Life in prison still means life and that the person still has their life to live, just in prison and living in prison for the rest of their lives. But that also means they are alive in prison and that they should be able to make out of that time in prison the best that they can do. That it should be a productive and constructive existence for them, the prison and society.
Just because an inmate is serving life without parole they shouldn’t be in lockdown in a cell most of their days essentially doing nothing. As long as they are behaving themselves and staying out of trouble and taking advantages that are in front of them. Things like education, work, community service, and other rehabilitation programs.
By all counts Susan Atkins did those things in her thirty-seven plus years and prison and made of her life sentence the best that she could and perhaps the best anyone could. Especially considering what she was in prison for and the condition she was in when she entered prison.
I truly believe the only bad if not evil person that is doing time for the Manson Family murders is Charlie Manson. That is his family hadn’t met Manson and not have fallen for some other criminals or criminals, that they wouldn’t of ended up in prison and probably made positive lives for themselves.
But given all of that, the fact is they including Susan Atkins did hook up with Charlie Manson and they did carry out his evil orders. And committed such crimes that their victims will never get over and recover from because they were murdered.
And a life sentence is exactly that. And unless you are paroled and why you would even be eligible for parole when you’re guilty of first degree murder and you’re a serial murderer, is beyond me. But unless you are paroled, you’re still on the hook for the crimes you committed. Which is why Susan Atkins shouldn’t of never been rewarded even a compassionate release from prison, which she wasn’t because of the crimes she committed.
Posted by Erik Schneider at 2:55 PM No comments: