President Kennedy had the line of the night, at least from what I heard saying that after hearing Marilyn Monroe sing Happy Birthday to him, he could now retire from politics. I mean after hearing a goddess like that with that voice sing Happy Birthday to you, what is the point of going on, what else could you even hope to accomplish at that point after hearing Marilyn sing Happy Birthday to you. It’s not just the President of the United States being the only politician that may be lucky enough to get Happy Birthday sung to you by Marilyn Monroe, but that Jack Kennedy might have been the only politician lucky enough to have Happy Birthday sung to them.
Jack Kennedy was certainly ahead of his time as far as how he related to Americans. Because he wasn’t just judged by the job he did as President, which of course all President’s are and he wasn’t just judged by how he related to Americans personally, which of course all President’s are. But he was also judged by how he related to people in a social way, he was our first hip President, someone who related well the entertainment community, including Hollywood. Which is a big reason why he had so many friends out there. Like Peter Lawford, who also happened to be his brother-in-law, Marilyn Monroe, Frank Sinatra and many others. That is how this event happened
Posted by Erik Schneider at 2:32 PM No comments:

Email ThisBlogThis!Share to TwitterShare to FacebookShare to Pinterest
Labels: Marilyn

1979 was the first season that the Notre Dame Fighting Irish played with QB Joe Montana. Who of course was drafted by the San Francisco 49ers in 1979 in the NFL after four solid, but not great years at Notre Dame. Danny Ford was just starting to build a college football monster at Clemson. Who took over the program in late 1978 a program that was a solid ACC contender, but he made them into a national power to the point in the 1980s winning the ACC and going to a January bowl game was expected. The only question was whether they would be playing for the national championship and how close would they get to that. They won the national championship in I believe 1981 or 82. And haven’t won it since which gives you a good idea how much Ford meant to Clemson football. 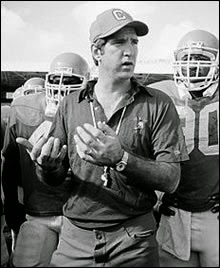 Posted by Erik Schneider at 12:38 PM No comments: