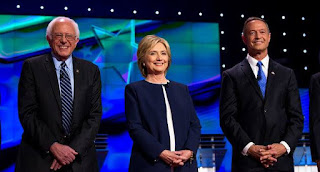 I believe once again Hillary Clinton, Bernie Sanders and Martin O’Malley, especially when Governor O’Malley was given opportunities to speak, were all sharp in this debate. And Senator Sanders and Governor O’Malley, tried hard to hit Secretary Clinton and landed a few shots. But when you’re each trailing Hillary by thirty plus points in the polls you have to do better than that. You have to win the game going away and put a streak together. Hillary, unlike in 2007-08, knows that she’s not only the frontrunner, but that she’s not inheriting the Democratic nomination for president. That she’s going to have to win it and not expect to win Iowa simply because of her name ID and that she’s a women.

Hillary, took some shots especially from Bernie, but I don’t believe anything happened Saturday night that changes the Democratic race. What Bernie and Marty, (ha, ha! He doesn’t like that!) are showing is that they belong on the same stage as Hillary and are going to make her earn the Democratic nomination. Or one of them will beat her. Bernie hit Hillary about the contributions that she’s getting from Wall Street. Hillary, came back at the Senator and accused him of questioning her integrity. And pointed out that she has a hundred-thousand small contributors. Something that if Governor O’Malley had, he would be in the race right now. Because he’s the Center-Left Progressive alternative to Hillary, who has real executive experience. Not Bernie Sanders, who represents the Far-Left of the Democratic Party. As well as the Green Party and Democratic Socialists USA.

I wrote a piece a couple of weeks ago that is in the Martin O’Malley section of this blog arguing about what should be the message for the Governor of this race. That he should be running as the Progressive With Results, because all the issues that they’re talking about in this race, he’s already accomplished in a very diverse state of over six-million people who has the highest per-capita income in the country and the best schools in the country. Decriminalizing marijuana, additional infrastructure investment, minimum wage increase, legalizing same-sex marriage, Maryland’s economy and bond rating didn’t collapse during the Great Recession and you could add legalizing gambling, which has kept a lot of jobs and money in Maryland. We finally got to hear the Governor make the case for why he should be the Democratic nominee for president. He’s the candidate who accomplishes progressive goals. And just doesn’t talk about what he wants to do.

I believe Senator Sanders, wants to be the next President of the United States, but a big part of his campaign is giving socialism and positive national voice and platform. And he doesn’t want the next president to be a Democratic. Especially someone like Don Trump, or Ted Cruz and he agrees with Hillary Clinton on enough to vote for her over the Republican, or a social democratic third-party candidate. And I think he knows what he’s up against in trying to beat her and is not going to do anything that can actually hurt her in the general election next year. So he’s not going to make this campaign about character and personal attacks. But instead make the best case for himself to be president and see where that takes him.

And I don’t see Bernie right now throwing a lot of long bomb passes at Hillary looking to get back in the game quickly. And the Democratic Party, wants Hillary Clinton to be the next President of the United States. And until Bernie and Marty O’Malley, make the case that they would be a better presidential candidate than Hillary, this race in the party will never be close. So yeah, Sanders and O’Malley, both hit Hillary with a few shots especially as it relates to Wall Street. But neither one hit her hard enough to change the complexion of this race yet. Which is good for the Democratic Party, because it means assuming she is the nominee, the party will have an excellent opportunity to go into their convention next summer as a united party.

Posted by Erik Schneider at 5:37 AM No comments: