I guess I have mixed feelings about Fran Tarkenton who is one of the greatest quarterbacks of all-time. And probably would be in my top ten, but I like a lot of other people who follow the National Football League I judge QB’s by not only how they play in big games, big regular season games that determine division championships, playoff positioning as well as playoff games, but I also judge QB’s by how they played in the biggest game. Which of course is the Super Bowl and yes you can argue that those Minnesota Vikings teams were the second best team in each Super Bowl that Tarkenton was involved in.

And I’m not looking down on Fran because the Vikings lost all of those games. But I’m looking down on him for the fact that he didn’t do everything that he could to lead the Vikings in winning those games. He had three shots at the Super Bowl and didn’t play very well in any of them, couldn’t even get the Vikings to the end zone in Super Bowl 10 against the Pittsburgh Steelers. A game where the Vikings defense played very well and kept them in the game the whole way, but where their offense did almost nothing.

So that’s where Fran Tarkenton comes up short with me, but as far as how QB’s have done before the Super Bowl, Fran is one of the best of all-time in games before the Super Bowl, not many better. John Unitas, Joe Montana, John Elway, maybe Roger Staubach. Not necessarily in that order, but Unitas is number one with me at least overall. And if you look at QB’s and what they are able to do with the tools that they work with and the talent they have around them, Fran is one of the best ever.

Fran is one of the best of all time, leading a mediocre New York Giants team in the late 1960s to a winning record. Didn’t have a running game or a very good offensive line to use as an example. Defense came up short as well, but he was a great QB who always knew who to throw the ball to and how to get the ball to the available talent that he had. Like WR Homer Jones and TE Bob Tucker who were good players, but this wasn’t the West Coast San Francisco 49ers or any team like that. But Fran got the most out of what he had to work with.

In defense of Fran Tarkenton, this idea that he had a weak arm. If you look at his highlight films, you see him completing a lot of long passes and he did have good WR’s. Like Sammy White, John Gilliam, Ahmad Rashad, Chuck Foreman was the Roger Craig of his era and like another WR. And you also see Fran drilling some passes into tight coverage. He didn’t have a cannon, but a strong enough arm to make the right throws. And the Vikings of that era were a possession passing team anyway. So he was a great QB, but I don’t have him up higher because he came up short on the biggest stage three times and never came up big. 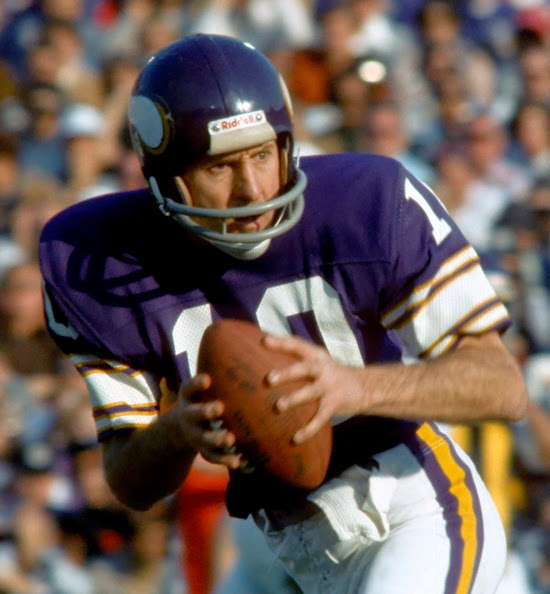 Posted by Erik Schneider at 2:48 PM No comments:

Just when you think Canada at least with their Federal Government is more Liberal then America and our Federal Government on social issues. And perhaps as it relates to narcotics, Canada has a War on Drugs including marijuana as well. And they have things like mandatory minimum sentences where so called offenders can be sentenced to prison. And have to serve a certain amount of time in prison if you posses a certain amount of lets say pot and of course heroin. Cocaine and meth as well but if you posses a case of wine or beer and you are twenty one or over at least in the. United States you wouldn't have any legal consequences come down on you unless you posses that alcohol for the purpose to sell to people who are under twenty one. In America and perhaps in Canada as well, if you are caught with lets say ten ounces of marijuana. Or cocaine, you could be looking at 3-5 years in prison and you are caught and convicted of attempting to sell those drugs. You are probably looking at a longer time in prison.

Here's just an example of why the War on Drugs in America is stupid and why our so called criminal justice system is not much smarter. And why we have so many people who are currently doing time in prison right now. People who could otherwise be producing and working for the country and contributing positively to society. Instead of taking up space in a jail or prison cell living freely if you want to call that living. Off of people who work for a living when these inmates who don't represent a threat to society. And are only in prison for possessing or attempting to sell narcotics and in an era of high debt and deficits in America. Where we have to get these things under control for the long term health of our economy. We need to look at the War on Drugs and what's clearly not working there and where we can save money by ending. This bogus war that should've never been started in the first place.

If we simply just treated marijuana like alcohol in America and transfered our current War on Drugs prison inmates. Who are only in prison for using or possessing marijuana to halfway houses to use as an example. Where they would work and pay rent there as they transition back into society. We could cut our prion population by hundreds of thousands of people and save billions of dollars every year. And collect tens of billions of dollars in tax revenue. But thats if we treated narcotics in this country based on intelligence instead of ignorance.
Posted by Erik Schneider at 11:19 AM No comments: