Baltimore Sun: Orioles Insider: Eduardo Encina: Orioles Right-Hander Tommy Hunter Hits 101 MPH Saturday: Could Find Home in Bullpen
This post was originally posted at FRS FreeState 1975 on Blogger
This could work well for the Orioles, because the starting rotation is set for the rest of the regular season and AL Playoffs. Which they have a very good shot at making at this point, so they don't need Tommy Hunter as a starter right now. Tommy Hunter has shown signs of being dominant as a starter in 2012 with his mid to upper nineties fastball that has movement and deadly breaking stuff as well. But he doesn't seem to very strong for more than five innings or so and struggles to get through five innings.

As a long or middle reliever, Tommy Hunter could let it go so to speak and let it hang out as far as his fastball and breaking balls. Because he knows he's only getting probably at most thirty pitches or so and doesn't have to go six or seven innings and pitch well for that long in a game. Because instead he'll come into the game for an inning or two when an Orioles starter gets in trouble or to hold a lead. And give opposing hitters something else to have to think about in the game.

Posted by Erik Schneider at 4:16 PM No comments:

Artist Jennette Brown: Whose Line is it Anyway? Christopher Walken

"This is Jeff, a guest on Whose Line, he does a great impression of Christopher Walken. It's hilarious! All ownership and copyright of this video belongs to 'Whose Line Is It Anyway?' and ABC Family. No copyright infringement intended."

And they would do scenes like Hoe Down where they would have to do a song off the top of their heads, or Super Hero’s where each person would have this made up Super Hero with a name that no Super Hero, who is sane and sober at least, would have.

And one comedian would start out with a name and as each comedian would enter the game, the comedian who came before would give the next comedian a name. So let's say Alcoholic Man would introduce let's say Mr. Clutz who would topple to the floor as soon as he’s introduced. And Mr. Clutz would do is act and then introduce the next person and say: “Thank God you are here Scared Shitless!" or something like that.

My favorite skit that they did is probably Weird Newscasters. Especially the two anchors and these two people would makeup the news literally on the spot. And would say something like: “Our lead story tonight, 200 people reported missing or dead as a result of an attack by Killer Tomatoes.”

And the second anchor with a weird character to play like a news anchor being played by race car driver whose had too much to drink or something. And he or she would say something like: “This just in: alcoholism linked to drunk driving. Shocking I know.” And they would introduce the weatherman who farts every time he speaks or something like that. As well as a sportscaster who falls in love with every women he sees in the audience or something.

My favorite character on this show even though I don’t believe Chris Walken has ever actually physically been on this show before is Chris Walken. Because he’s a great comedian on the spot, who never needs a script to be funny, movies like American Sweethearts, True Romance and his appearances on Saturday Night Live are excellent examples of that.

And Jeff Davis from Whose Line, does a great impression of him and that’s what makes this show great and how you tell great comedians from good or average comedians. How funny are they when they have to be and when they don’t have a script.
Posted by Erik Schneider at 3:43 PM No comments:

Email ThisBlogThis!Share to TwitterShare to FacebookShare to Pinterest
Labels: Whose Line 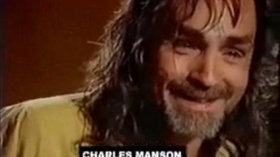 As evil as Charlie Manson might have been or still is and he was clearly and evil man, whose responsible for the murders of a lot of innocent people and even seem to draw pleasure from them, that’s not the whole story about Charlie. You don’t put together a crime family like the Manson Crime Family if you don’t have some leadership ability. That not only draws people to you, but you can make them do things they normally wouldn’t do. Like good middle class teenagers, people who should be in college, going out and murdering innocent people, people who are complete strangers to you. Because you see them as part of some establishment that’s holding down the rest of the country.

Charlie Manson blamed his situation in life, on society and to a certain extent he was correct. Coming from a broken home, never knowing his father, barely knowing his mother, being shipped around as a kid. Doesn’t excuse the fact of all the people he had murdered, but he got off to a real bad start in life. And once he became an adult and got out of prison for the last time in life, he decided that he was going to takeout his frustrations on society, as much as he can for as long as he can. Charlie Manson and his young Baby Boomer soldiers, against the rest of the world.

What we saw from Charlie Manson’s power was not only the ability for him to make people do things they wouldn’t normally do, like things as evil as murdering people, but people who basically fell in love with him. And saw him as a God or Jesus Crisis, people who idealize a murderer. Which is what we saw in this interview. Even though people who are doing life sentences in prison, partially for hooking up with Charlie Manson. Who see him for exactly what he is. A cold-blooded murderer that would manipulate people to do what he wouldn’t do himself.

Posted by Erik Schneider at 2:50 AM No comments: