The Defense of Marriage Act is clearly Unconstitutional, for the life of me I can't figure out why Bill Clinton. Signed this into law as President in 1996, a man whose a lawyer and whose suppose to be a Liberal Democrat and a big believer of Civil Rights, who served as Attorney General of his own State. Who now says signing DOMA in 1996 was the worst decision he's ever made, DOMA is Unconstitutional for 2-3 reasons, it violates the Equal Protection Clause, that protects all Americans. And gives all of use equal access under law and it also violates the 10th and 11th Amendments, that grant certain powers to the States, marriage has always been something thats been traditionally. Regulated by the States, that changed in 1996 when Big Government Republicans who believe the Federal Government, is apparently now powerful enough, pushed DOMA through Congress. DOMA has only stayed on the books as long as it has, because Right Wingers who believe homosexuals don't. Deserve the same Constitutional Rights as heterosexuals in America and see homosexuality as immoral or something, have ruled in favor of DOMA time after time.
Posted by Erik Schneider at 12:40 PM No comments: 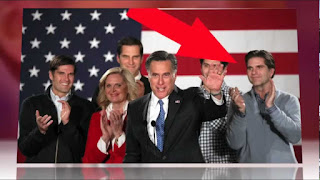 Not the most loving and respectful men of the presidency. The Romney Boys, they seem more like thugs working for their father. They seem to want to do what their father other than in the first presidential debate what their father couldn’t do. Which is to beat up President Obama, or at least beat him somewhere. I mean Mitt, clearly wins the first debate and is still clearly trailing the President in the Electoral College, despite now being neck in neck with the President in the popular vote. Mitt, doesn’t look like a winner right now, but someone whose trying to find any place where he can win. So he’s not the Mike Dukakis of the GOP. Someone who badly loses a presidential election that he should have won.

It’s hard to hear negative facts about your father especially in a political campaign. Especially when those facts are about one’s lack of experience, knowledge, judgement, honesty and even credibility. The Romney Sons, might know who Dad is, but the problem is their Dad won’t let the rest of the country know. Because he keeps turning into someone else depending on what office he’s running for, what year he’s running and the people he feels he needs to have supporting him. He’s Moderate Mitt in Massachusetts, he’s Religious Conservative Mitt in 2007 when he’s going for the Christian-Right in Iowa and South Carolina. And now he’s the businessman with results, even though as Governor of Massachusetts, he had a weak jobs record. And laid off a lot of people as a businessman.

Who is Mitt Romney and what do you believe in? Would be my question to him if I ever interviewed him. But I would be carrying a whole notepad of paper, or perhaps my laptop waiting for ten different answers to the same questions. As he’s telling us every different position he has on the same issue. And doing that for each issue. Americans are funny this way in that we like our presidential candidates to tell us who they are and what they believe with some consistency before we decide who we’re going to vote for, not after. I guess we’re just stubborn that way and don’t have much faith in coin flipping when it comes to choosing our political leaders. But we’re into finger flipping when it comes to political leaders that we don’t like. As Mitt knows all too well right now.

Posted by Erik Schneider at 2:21 AM No comments: