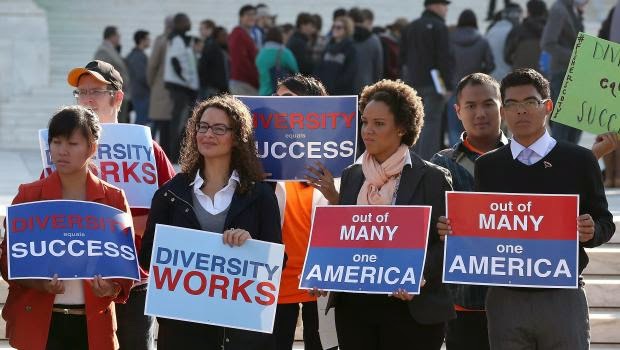 Imagine fifty-years ago when the U.S. Government under the Johnson Administration had a federal policy designed to empower racial and ethnic minorities in this country who were stuck in poverty that was built around infrastructure, education and job training. That all of that money, or at least some of it that went into the Great Society was put into low-income communities. Things like roads, bridges, schools, health care centers, job training centers, incentives for economic development. Are we still looking at an African-American poverty rate of thirty-percent today and a Latino-American poverty rate of twenty-five percent today?

Fifty-years later after affirmative action, who’s benefited from it the most part. Caucasian-American women who were already doing well. And Asian-Americans who were already doing well. Latinos are doing better, but a lot of them have come to America and started their own business’s. And some of them have benefited from affirmative action. Like the kids of immigrants and others. And yes African-Americans no longer have a poverty level of fifty-percent and that is a good thing. But at thirty-percent it is still twice that of the national average. About the level they were fifty-years ago. Twice that of the national average.

So what we’ve done as a country with affirmative action is to tell Caucasian men and women as well, as well some Asian-Americans, that they are already doing very well in this country. And because of that they are going to be denied access in some cases like at college and federal contracts, so people who aren’t doing as well and in many cases aren’t as qualified for those opportunities to have that new access so they can do better as well. And a lot of African and Latino-Americans have taken advantage of that access that they wouldn’t of gotten except for affirmative action. But at the expense of Caucasians and Asians who were more qualified going in.

I’m all for empowering people of poverty regardless of race and ethnicity to do well in America. That is something I believe as a Liberal, liberating people from poverty. But there’s a right way to do that and a wrong way. And the wrong way to empower people who are struggling at the expense of people who are doing well and have taken advantage of the opportunities they were given in life by working hard and being productive. What you do with people who are struggling is give them opportunities to get themselves out of poverty. You invest in their communities with new economic development. You give them education and job training opportunities so they can get themselves the skills that they need to get a good job. You modernize their schools, roads, bridges and everything else that communities have to have to be strong.

We could’ve been doing these things fifty-years ago when economic times were good and weren’t running up huge debts and deficits. Even with the Vietnam War, instead of affirmative action. Instead concentrating so many poorer Americans in one community where they are dealing with bad schools for their children. Where the parents of these kids haven’t finished school themselves in many cases. Where they are dealing with high crime and criminal gangs. Because when business’s leave communities crime tends to move in. Because the resources aren’t there to fight crime in an effective way. And with a better more proactive and even more liberal approach to economic inequality, we could be dealing with much lower poverty rates in this country.

Posted by Erik Schneider at 3:20 PM No comments: