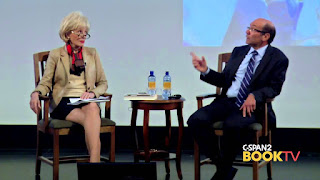 This piece was originally posted at The New Democrat: BookTV: Lesley Stahl Interviewing Gil Troy- The Age of Clinton: America in the 1990s

I guess I generally agree with Gil Troy about Bill Clinton, but perhaps I would put it differently. I don't see Bill Clinton as either a Centrist, or a Conservative, or a Center-Right Republican. Someone who would be mainstream on the Right, but certainly not Far-Right. Like Ronald Reagan, to use as an example, or Senator John McCain today. Clinton, was and still is a Liberal, but he's a true Liberal. Not part of the New-Left that is part of the Baby Boom Generation. But someone who wanted to use government to empower people in need to be able to get themselves up. But also have government do the basics that we need it to do. National defense, foreign affairs, infrastructure investment, law enforcement, promoting American trade. All while being fiscally responsible and operating under a budget and protecting Americans personal freedom and civil liberties.

Pre-Bill Clinton, Liberals were seen as soft and socialistic in nature. That had a new tax, or tax increase as well as new big government program to take care of everyone's problems for them. While believing government shouldn't do the basics and its first responsibility was to protect the country from predators. Protect the nation from terrorists and invaders, but also from hard-core criminals that needed to be in prison. Liberals were seen as people who put the rights of criminals over their victims, who had an excuse from every criminal for why they shouldn't do hard-time in prison. That American defense policy was the problem and not something we should do. That poor people shouldn't have to finish their education and work, because government should just take care of them.

I believe that then Governor Bill Clinton, ran for president in 1991-92 to not only save the Democratic Party and win back the White House, but to save American liberalism and Democratic liberalism, from the New-Left and even the Far-Left in the Democratic Party. That were more social democratic, if not socialistic in nature. That didn't believe in national defense and law enforcement, that there was no such thing as government being too big and taxes being too high. Because the people would just get that money back in government services anyway. Bill Clinton, wanted to not just bring liberalism back in the mainstream where it should always be. Not not some dovish big government philosophy, but wanted liberalism and Liberal Democrats to be seen that way as well.

It's not called the Reagan Revolution for nothing. Pre-Ronald Reagan, America was still in the Progressive Era of the New Deal and Great Society, but Americans were starting to get tired of paying for all of those taxes to fund all of those government programs. Especially if they were out-of-work, or not working enough and seeing their incomes go down and their taxes go up. Which is the 1970s from an economic standpoint. Ron Reagan, capitalized on that and brought a new Center-Right alternative to New Deal progressivism. What Clinton wanted to do, was to do what Reagan did against progressivism with his conservative philosophy of personal responsibility and freedom. But respond to the Reagan Revolution from the Center-Left. With a limited government philosophy that was about having government do the basics well. While at the same time helping people in need help themselves so they wouldn't have to stay on Welfare indefinitely.

Bill Clinton, is not an FDR Progressive and sure as hell not a George McGovern Democratic Socialist. But a Jack Kennedy New Democrat Liberal, who believed that government could be a positive force in people's lives. But to help them help themselves as they're helping them survive in the short-term. But that government shouldn't replace individual freedom and responsibility and that government again had to do the basics well. Defend the country, fund infrastructure, arrest, prosecute, and lockup criminals and do these things in a fiscally responsible way that promotes economic and job growth. If you look at Governor Mike Dukakis and his failed presidential bid of 1988, ideology Dukakis and Clinton, are very similar ideologically. But Clinton didn't run away from his liberalism, but instead sold it on what is truly is and not how it was stereotyped. Which is why he was politically successful.

Posted by Erik Schneider at 1:47 AM No comments: