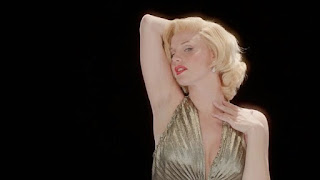 I saw this movie when it came out last weekend and not to pat myself on the back or anything, but this movie lays out what I and others have already written about the life of Marilyn Monroe. That she wasn’t a blonde bimbo who only had these goddess features and personality going for her. That there was real substance and talent and even intelligence there. But that she was immature, irresponsible and I would add overly adorable. That even by the time she died at the age of thirty-six, still only looked and acted half her age.

Kelli Garner, who not only played Marilyn and was the official star of the movie, but she was the star of this movie in actuality as well. She had Marilyn down cold and looked and played the part so well, that only Marilyn could’ve played herself better. Jeffrey Dean Morgan, does a very good Joe DiMaggio and they do a very good job of showing the hot and cold on and off relationship and short-lived marriage between Marilyn and Joe D. And they do a very good job showing how Marilyn was raised. Never knowing her father and her father never being part of her life. Her mother, never being mentally capable of taking care of Marilyn. And spends her life in and out of institutions.

Marilyn, certainly had an interesting childhood. But she had family and people around her who cared about her and were always there for her. So I don’t think other than her biological mother not really being there for her for a lot of her childhood and her father being out of the picture the whole time, that you can blame how Marilyn was raised for how she turned out. As far as an immature young women, who mentally was a teenage girl, not in knowledge, or intelligence, but in maturity and responsibility. Because she did have an adopted mother who loved her and raised her pretty well.

If you like bio pics and are interested in Hollywood, especially from the past that you might not be as familiar with as you are with modern Hollywood and the entertainers from the past and you’re interested in and even a fan of Marilyn Monroe, as I am, this is a very good movie and worth seeing. Worth the three-hours without the commercials to spend watching this movie. Kelli Garner, has Marilyn down and they cover most if not Marilyn’s whole career and do a very good job of that. This is a very good movie.

Posted by Erik Schneider at 4:30 PM No comments: