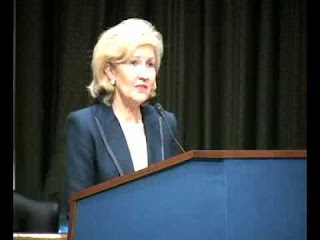 Source:New America Foundation- U.S. Senator Kay Bailey-Hutchinson (Republican, Texas) speaking to the New America Foundation about a National Infrastructure Bank.
"A Bank to Re-Build America? - The Hon. Kay Bailey Hutchison (R-TX)"
From the New America Foundation
When you look at Democrats in Congress today, it's hard to find any especially in the Senate that are talking about an economic agenda about putting Americans back to work and creating economic growth. But Senator John Kerry is one of those members that is actually not just talking about the economy, but laying out an agenda to put Americans back to work. If you want to create jobs, we need economic growth to do it, you want to rebuild the manufacturing base in America, economic growth would help with that as well. You want to pay down the Federal deficit and debt, you need economic growth to do it.
According to the Core of Engineers America needs in the neighborhood of 500B$ of infrastructure projects completed in America to fix our physical infrastructure including physical repairs. These are well paid and high-skilled jobs that would be created in America to do this work, we are talking in the hundreds of thousands of jobs that could be created to do this. One way to rebuild our manufacturing industry in America, one way is through infrastructure projects. Because we are going to need the tools and supplies to work on the infrastructure projects.
These supplies could be made in America, jobs would have to be created to build these supplies that are needed to complete these infrastructure projects. So infrastructure projects would not only help rebuild our needed infrastructure in America but would also help rebuild our manufacturing industry in America. Because supplies are going to be needed to complete these projects.
What is a National Infrastructure Bank just for the off chance that people reading this aren't familiar with that term: it's essentially independent of the Federal Government but still owned by the FEDS. Just operated independently, thats a non-profit service or corporation that would fund infrastructure projects around the country. That would look and find infrastructure projects around the country that need to be built or repaired. Including taking requests around the country from state and local government's, as well as in the private sector. To finance infrastructure projects around the country.
And it would raise the money in the private sector to finance these projects and these investors would make profits off of the projects once they are built. And then the NIB would hire private companies to do the infrastructure projects. Congress and the Administration would be out of this except for oversight purposes. And infrastructure projects would be rewarded based on their value and need not political relations.
For people concern about costs of an NIB and our deficit and debt, which I'm one: a beauty of the NIB is that it would pay for itself. Because the NIB would collect revenue from the private sector for its operations, as well as raising the revenue needed to pay for the infrastructure projects. It would need startup capitol in the beginning though that it could pay back. And there would be no more no bid contracts either. Companies would compete with each other for the right to work on these projects.
An NIB wouldn't have to be a monopoly either: states and localities could have their own Infrastructure Bank. There could even be Private Infrastructure Banks as well. Another beauty of an Infrastructure Bank would be that it would work on more than things than just roads. This would be a huge plus for infrastructure obviously but not just roads, bridges waterways.
We have crumbling public schools in America, states and localities have been slashing their education funding. And NIB would help restore that funding and help rebuild crumbling schools, as well as build additional schools and other buildings. A National Infrastructure Bank would be a great first step in rebuilding the American economy because of all the infrastructure investment we need. And looking back, it should've been part of the 2009 Recovery Act. We would probably have a lot more jobs created today as a result.
It would be a plus for our economy because of the jobs, our infrastructure because of the investment in it. And our deficit and debt because it would be self-financed and because of the jobs it would create. So it's something we should do and I hope Senator Kerry and Senator Hutchinson come up with the votes in the Senate to make it happen and the White House gets on board as well.
Posted by Erik Schneider at 2:54 PM No comments: