The Daily Review: The Week in Review- Life is a Highway, Move on, or Get Off 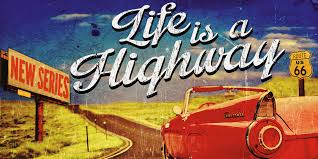 A slow week on this blog as far as activity. This blog hasn’t posted anything since Wednesday night, because I had a crazy week. I had to get my bike to the bike shop, making plans for the holiday season including getting together with friends who are coming to town who I haven’t seen in a while, as well as friends who live in town that I haven’t seen in a while before I head out to the West Coast, Seattle to be precise on the 23rd. Returning calls yesterday that I missed, because my phone was dead and didn’t get it get back until Saturday afternoon.

Speaking of that, I have a friend from high school and we go back to early 1991 our freshmen year in high school. My birthday was last Tuesday and he finally called me, because he was finally able to get my phone number and manage to hang on to it. At least long enough to call me. He’s been messaging me on Facebook every time he’s wanted to talk to me, really since 2011, because he now lives on the West Coast where he’s been since he graduated from college in the early 2000s. He’s lost my cell number and I only have a cell number, every year at least since 2011. And I told him the last time he Facebook messaged me, “that if you want to talk to me, you’re going to have to get my number and call me.”

We only talk about once a year anyway, because we’ve drifted apart the last 10-15 years and don’t have much in common anymore. And talk and get together during the holiday season because he comes back in town every year to see his family for the holidays. And we generally get together for the holidays. Anyway he finally managed to get my number from a mutual friend and he called me on birthday last Tuesday night. We talked for about an hour, caught up, talked about what we might do together as well get together with mutual friends and all hanging out together in a big group. It was a good chat and the phone number issue never came up.

My I-Phone dies on Wednesday and I mean just died absolutely no life whatsoever in the phone. Didn’t even respond to my charger. I make a call with it on Wednesday afternoon and it’s probably at 80-90% power at that point. I go take a shower, come back about twenty-minutes later and the phone is simply dead and non-responsive. The call I made was to the bike shop, I was just returning their call, because they wanted to ask me questions about the bike. The call was maybe ten-minutes and the battery on my phone is pretty strong to begin with. Tried a couple different chargers on it as well as calling the I-Phone with a portable phone and the phone didn’t respond to any of that. So I knew I had a problem and I was going to have to get the phone looked at.

I called the Apple Store in Bethesda, Maryland to make an appointment. Great store and very customer friendly and responsive. You can see why they have sold out football stadium crowds of business everyday and why people have to camp out the night before outside of the store people trying to buy the latest, well I-Phone or computer, just to get service there while they’re still young. But that’s the problem, because they’re so popular and efficient, at least in Bethesda, its hard to get timely service there. I made an appointment on Thursday to get my phone looked at and was able to get the appointment yesterday. They’re not called bar genius’ for nothing and I’m not talking about making drinks.

The guy who worked with me at the store, tried a couple a different chargers as well as scanning the phone with another device and opening the phone up to see what might be the problem. He finally got the phone to reboot and was able to get life back in the phone. And probably had the phone fixed about ten-minutes later after he saw me. And told me, “sometimes these phones just crash and shut off and perhaps just need a break and a chance to reboot and come back.” I’m paraphrasing, but that is pretty close and he told me what I can do to fix the phone myself the next time it simply dies on me and doesn’t respond to the charger.

There was plenty on my plate that I wanted to blog about last week, but I was borderline mentally exhausted by Wednesday. Really just dealing with my bike which is how I get around for the most part as far as running day-to-day errands, not having a phone for three days and getting word out that if you need to contact me, you’re going to have to email, or send me a private message on one of these social networks that I’m on. Dealing with what I might be doing the week of Christmas with hanging out with friends and then heading out-of-town a week from this coming Wednesday. This week should be pretty active on the blog and I’m looking forward to really my last active week on the blog before I go out-of-town and before the new year.
Rascal Flatts Vevo: Life is a Highway-Live on The Late Show With David Letterman

Posted by Erik Schneider at 6:33 PM No comments: