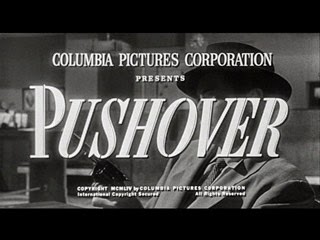 This post was originally posted at The New Democrat Plus

“Money isn’t dirty, just people are”. One of the better lines from Pushover delivered by the great Kim Novak who was great at delivering lines because she had a great voice and came off as so real because she was so real. She acted as if she was the person she was playing and delivered the lines not as an actress, but as if she was the person she was playing. I’ve at best seen bits and pieces of Pushover and saw the whole movie last night in preparation for this blog. And I was very impressed and saw a great crime drama involving real people and how they deal with bad situations.

Pushover starts off as being about a police stake out of a girlfriend of a bank robber that the police are after. Who stole two-hundred-thousand-dollars from a bank. They believe the girlfriend played by Kim Novak might be in on the operation or at the very least knows about it. And that her boyfriend is going to see her and perhaps tell her what he knows and where to meet her and all of that. Fred McMurray plays either a police sergeant or senior detective on this case who is leading the stake out and only has a police lieutenant to report to. He meets the girlfriend on purpose and they hit it off immediately.

Lona played by Kim Novak figures out that Paul Sheridan is a cop and has been investigating her. And he confesses to that and tries to get her to go downtown with him to tell the police what she knows about the bank robbery. She refuses and instead suggests that they get the money and split it and run off together. Paul refuses Lona’s offer strongly at first, but also wants to protect her from her boyfriend and the police in the stake out and tells her about the stake out and how to behave. How to answer the phone and how to talk to people and when to leave her apartment and everything else.

Paul finally gives in, but without a strong push from Lona. And now they are completely working together during this stake out that Paul is supposed to be leading as the senior detective or sergeant on the case. And now they are working together and just trying to buy time and not get caught and figured out while Paul’s men on the case are getting more suspicious of her and want to know what she knows about the case. Paul starts off as a good cop in the movie, but falls in love with the target he’s supposed to be investigating and the case goes bad from there.

Posted by Erik Schneider at 4:42 PM No comments: