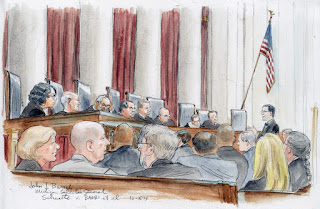 The end of quota set-aside racially and ethnically based affirmative action, is finally coming to an end in America. And may be headed out the door this year with the Texas case at the U.S. Supreme Court. The type of affirmative action that I just described, is not popular in America and that is because of the two young adult populations. The Gen-Xers and the Millennial’s, who simply don’t judge people by race and ethnicity, by in large with exceptions with the Far-Left in these generations. And we have a Supreme Court that at least has a majority that doesn’t want racial and ethnic set-asides and a Congress that can’t and won’t do anything to overrule the Supreme Court, assuming this affirmative action gets thrown out. Which means what comes after racial and ethnic set-asides and quotas once they’re thrown out.

As a Liberal myself I see this as a great opportunity, because once racial and ethnic set-asides are thrown out, we can get back to the heart of problem for why racial and ethnic majorities and really why African and Latin-Americans, are behind economically compared with Caucasian and Asian-Americans. Which has to do with things like education, economic development, infrastructure and civil rights enforcement. African and Latin-Americans, are behind Caucasian and Asians economically, not because of their race or their ethnicity. But because they tend to come from communities where education and economic opportunity, simply don’t exist. At least not to the point where these communities can be successful.

Before doctors can prescribe prescriptions to medical conditions, they first have to know what the problem, or problems that their patients are facing. And find a prescription to those problems. If you have communities that are dealing with high rates of poverty and they lack infrastructure, education and economic development, it seems to me at least that is where you go to fix that economic condition. Not give set-asides to people who don’t have the education and skills to take advantage of what you’re trying to reward them with. Especially when those set-asides come at the expense of people whether they’re Caucasian, Asian, or whoever, who are qualified to take advantage of those economic and educational opportunities.

A real affirmative action program in America, would look something like a Marshall Plan, but do it in America. Where we’re pouring in aide and resources, into underserved communities in America, urban, rural and even suburban, regardless of race. Empowering non-profits, building underserved communities, encouraging economic development in those communities, building schools, making higher education universally affordable, empowering people in those communities to become small business owners, toughen civil rights enforcement, so it’s not in the financial interest of organizations, to deny access to people simply because of their race, ethnicity, or gender. And then you would see real racial and ethnic equality in America when it comes to economics.

A real affirmative action plan would be a plan that would empower underserved and economically depressed Americans to be able to stand up on their own feet and acquire real economic freedom and live their own American dream. Simply because they were given an opportunity not because of their race or ethnicity, but because they are an American who simply needs an opportunity to get on their own two feet. Not giving people opportunity who are not ready for it, simply because of their race or ethnicity, especially at the expense of people who are qualified to have that access. Economic empowerment should be about empowering people in need. Again regardless of race, ethnicity, or gender. Not about giving access to people simply because they’re a member of a traditionally underserved group in America.

Posted by Erik Schneider at 1:48 AM No comments: