The Onion: Blog: Indiana Governor Insists Religious Freedom Law Has Nothing to do With Thing it Explicitly Intended to do 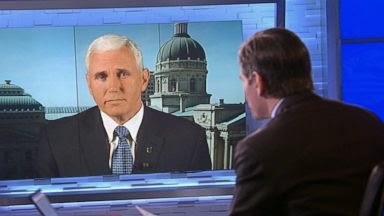 The Onion: Blog: Indiana Governor Insists New Law Has Nothing to do With Thing it Explicitly Intended to do

If I’m a governor of a state like Indiana, is passing laws to cut back on tourism and economic revenue really something that I would be interested in doing? Forget about me, because you could use anyone as an example for this. I mean what does Indiana have outside of Indianapolis, the Indianapolis 500 and a good NFL team and a good NBA team. Unless you love college basketball and auto racing why would you go to Indiana? To see how long to takes to get mugged, beaten, raped or murdered in Gary. Maybe go to a Notre Dame football game. But you’re a fan of Notre Dame like part of the alumni, you hate Notre Dame! And Notre Dame only plays six home games every year.

I don’t say these things to put Indiana down. But they do have a lot Christian fundamentalists who are stuck in the 1800s and actually still believe it is the 1800s. Because they don’t believe in calendars or anything. And that women shouldn’t be allowed to vote, let alone work. And that gays are terrorists and not just people who are attracted to their gender instead of the opposite sex. And that pre-marital sex should be not just be a crime, but punishable by death. Except for these small factors, I’m sure Indiana is a great place to live. Unless you’re gay, or practice a non-Christian religion, perhaps come from another country, or even state.

You would think any state house worth its salt would have an office or at least someone in charge of gauging the economic impact of laws that the legislature passes and the Governor signs. That seems like commonsense anyway and Indiana does have very good schools there. Like Notre Dame and Indiana. So you would think there would be somewhere there to tell Governor Mike Pence, “look Governor, if you sign this law, we may see boycotts of our fair state. And as a result lose some serious tax revenue. Because business’s and other states who don’t look down at homosexuality, marriage or otherwise won’t want to be associated with a state that they see as discriminatory.”

And maybe Governor Pence had that person like a state economist and perhaps economics professors at one of their fine schools tell him those things. And Governor Pence said, “you know what, homosexuality is a sin! That must be wiped out! As Michelle Bachmann said it is a threat to our national security and that includes Indiana. We don’t want dem folk here and we are going to wipe them out. Which is more important than whether business’s and other states want to do business in our state.” No, I’m not saying that Governor Pence actually said that. Well used those words exactly, but he does represent a lot of people who feel that way. And comes from that wing of the Republican Party.

Posted by Erik Schneider at 3:22 PM No comments: