The Atlantic: Opinion: Josh Freedman & Michael Lind: The Past and Future of America's Social Contract 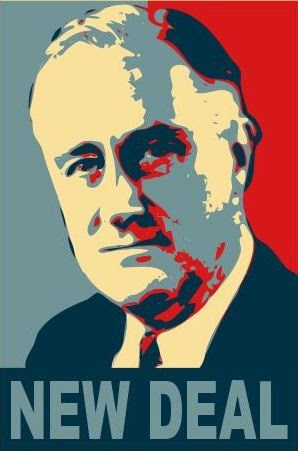 The Atlantic: Opinion: Josh Freedman & Michael Lind: The Past and Future of America's Social Contract


When we are talking about the social contract, we should be clear about what are we talking about. Because this gets to the heart of what we want from government in America especially the Federal Government. Are we talking about the American tradition of the safety net that has helped contribute to the largest and most powerful economy and country in the world. Or do we want a Scandinavian welfare state.

Where the Federal Government would play a huge role especially in an economy of seventeen-trillion dollars in a country of three-hundred and ten million people in providing us with most of the services that we need to live well in America. Or are we talking about building off of the New Deal not to turn Americans into Nordics economically and ideologically, but to empower more Americans with more economic power in this great vast diverse huge country of three-hundred and ten million people. And empowering more Americans regardless of race, ethnicity and gender with the economic power to live in freedom to be able to take care of themselves.

As a New Democrat I’m in favor of the third option of building off of the New Deal by not having government take care of more people. But using government to empower more people to be able to take care of themselves. Which would be great for the economy as well as the fiscal condition of the country. With fewer people collecting from the social insurance system and more people paying into the system. Because we would have a larger middle as well as larger upper class with more people starting new business’s.

Because of the greater access to education including college and fewer people in the lower economic class either unemployed. Or working low-income jobs, but still collecting public assistance to survive. And again and I’m not trying to sound partisan ideologically, but again this gets to what do you want from government. And who do you trust to provide people with the services that they need in life. Do you trust government to take care of everyone. Do you trust an unregulated and almost completely tax-free corporate America and so-called free market to work for everyone. Or do you trust an educated workforce and educated individuals to be able to make their own decisions with their own lives.

As a Liberal I believe an educated public with the right tools and education can take care of themselves and do not need big brother or big government or a nanny state to do that for them. And the main problem with our workforce right now is that we do not have enough workers to be able to make with enough of an education to have the power to be able to take care of themselves. And a big reason why the Left right now is debating what should the role of government, especially the Federal Government be to address the income and skills gap in this country.

I believe Liberals agree with Progressives or Social Democrats that the Federal Government should be doing more. But we differ on what that new role should be. With the lets say further Left of the party essentially wanting to transform America into Scandinavia economically and politically. With the JFK/Clinton New Democratic Coalition of Liberals saying that when people have the tools that they need, they tend to make good decisions with their own lives instead. And do not need government doing everything for them.

My message of economic power and creating what I would call and economic power system, for lack of a better term right now, is about education K-College and quality education for all through college. Once we establish that and lookout for the American economy especially as we move towards energy independence, rebuild our falling infrastructure system and actually start paying down some of our national debt.

The energy and debt are already under way, but the infrastructure still needs a new plan out of Congress to make that happen. And universal access to education and job training for our low-skilled and low-income workforce as well. Our population that collects from public assistance whether they are working or not. So they can get the skills that they need to also live in freedom, the economic power they need to be successful in America.

Posted by Erik Schneider at 2:03 PM No comments: