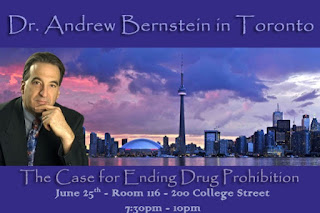 I mostly agree with Andrew Bernstein here and I disagree with him when it comes to full legalization. I’m not a Libertarian and that is just one example of why I wouldn’t legalize cocaine, heroin and meth. This idea that people who consume these drugs and lot of these users are addicted to these drugs and is why they still use them, that they’re only hurting themselves, is simply false.

Cocaine, heroin and meth, are a lot stronger than marijuana and alcohol and are very addictive. And when you get and stay on heroin, cocaine and meth, you’re not only devastating yourself physically, but its bad for our healthcare system with all the added costs to our emergency rooms. And it hurts our economy as well, because of the lack of productivity that comes from having workers on those narcotics. You legalize those drugs in America and we’ll see a lot more accidents on our roads and people making horrible decisions that hurt others. Simply because they don’t know what they’re doing, because they’re high.

So here’s what I would do. End the War on Drugs and even end drug prohibition. I want marijuana to be legal everywhere in America and taxed and regulated like alcohol. But with the current makeup of Congress and even with a Democratic President, that is not very likely right now. But what I believe Congress could do and President Obama and the U.S. Justice Department is already doing, is to stay the Feds won’t interfere in states that decide to legalize marijuana. And won’t prosecute marijuana cases that involve the simple possession, usage and selling of marijuana for adults in those states. Congress and the President, could make that official Federal policy going forward.

As far as cocaine, heroin and meth. Again, end the War on Drugs and end drug prohibition. But that’s not the same as legalizing those drugs. What I would say for people who choose to use those drugs, they would no longer face prosecution, jail, or prison time, for simply being under the influence and in possession of those drugs. But if they are just in possession of those drugs, they would be fined for the amount that they have. If they can’t pay it, they would work it off. If they’re caught under the influence, or are addicts, they’re looking at forced drug rehab, at their own expense. As well as continue to prosecute cocaine, heroin and meth dealers.

The War on Drugs, is a complete failure. The War on Iraq, looks like a brilliant military strategy and campaign in comparison. But just because the War on Drugs has failed, doesn’t mean we should make a colossal mistake in the opposite direction. We need a sensible narcotics policy in America, that supports personal freedom and choice, but at the same time also makes sense for our economic, health care, law enforcement and corrections systems.

Posted by Erik Schneider at 2:17 PM No comments: