I don’t think there is a lot new here at least from what we already know about Charlie Manson, at least the people who have followed his life in and out of prison. The one thing that is different, is that he’s in a medical facility, instead of hardcore prison and he’s not in solitary confinement. Tom Snyder was granted excellent access of Manson and Manson’s time at Vacuville. It would’ve been nice to know what Manson was doing there, because it did look fairly healthy, at least physically. Mentally I’m not sure he’s ever been healthy and has ever been a right frame of mind, but that is a different story.

Manson apparently still living on his own planet. Tom Snyder asked him point-blank, “why do people follow you”? And he does this little dance and does all of these vibrations, like he’s a god or something. And Snyder asked Manson about Vince Bugliosi’s book, the man who prosecuted The Manson Family and his book about those trials. And Manson said that Bugliosi got the times and dates right. And that was essentially Bugliosi’s version of what happened back then. But nothing about whether Bugliosi was accurate or not.

Charlie Manson has been in prison for his last crimes for now forty-five years. The man is now eighty-years old and when he went to prison for the last time back in late 1969 or early 1970, he had already spend half of his life in either juvenile hall, jail or prison. That is all he knows. And even today he still doesn’t take any responsibility for his crimes. So why would he of bothered to do that back almost thirty-years ago. The man belongs in hell and if he’s going to be allowed to live he should and is in hell on Earth. 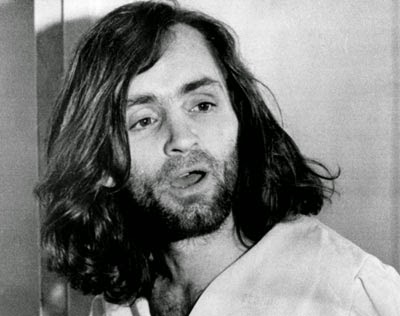 Posted by Erik Schneider at 4:19 PM No comments: