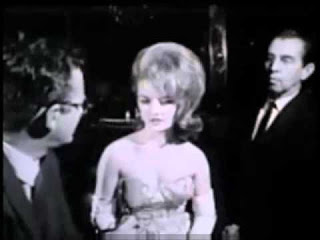 Perhaps one of the most famous nightclub employees of all time. I don't know much about Karen Carlin and maybe that is because that there isn't much to know about her. But what I get is that she was an attractive women who worked for Jack Ruby at Jack Ruby's nightclub The Carousel in Dallas. And worked there simply because she needed the money. But that she's not someone who has much if any information about Jack Ruby. Other than Ruby might have shot Lee Harvey Oswald the assassin of President John F. Kennedy. She simply worked for the man and only worked there because she needed the money. Because he husband had a hard time holding a good job.

You have to know that this whole story had to do with the assassination of an American President. John F. Kennedy who was President of the United States. This was so very new to most people in the country and the first presidential assassination that was covered in the electronic age with network TV and network news. And any person that might of had some connection to someone who was a big part of this story was automatically seen as suspect, or at least as a potential suspect. Karen Carlin, not only knew Jack Ruby the killer of Lee Oswald who assassinated the President, but she worked for him. Which meant that people automatically assumed that she must know something important about this story.

Posted by Erik Schneider at 3:30 PM No comments:

I saw this speech last week when I was watching a documentary about President Clinton and his Presidency. I might of seen this speech before, but I simply can't remember, but I already believe it's probably the best speech he's ever given at least as President of the United States. Even better than his first inaugural, or his 1992 or 2000 Democratic Convention speeches. All great speeches if you are not familiar with them, I suggest you watch or read them even if you don't like Bill Clinton, but someone who likes listening to good speeches. What made this speech great was the time that it was given, twenty five years after Martin Luther King was assassinated, not the anniversary of that assassination, this was November, 1993 MLK was murdered April, 1968, but twenty-five years after he was murdered and what else made this speech great was the simple honesty of it. He was attempting to speak for MLK, no one of course can do that we are simply talking about perhaps the greatest speaker this country has ever produced.

But what President Clinton was attempting to do was to layout what MLK would think of America. And the African-American community twenty-five years later and the progress that it has made. But the challenges that still remain and what he died for and what he didn't die for. That fewer African-Americans as a percentage of the country lives in poverty and more live in the middle class. And are well-educated but still too many live in poverty and so-forth. But the line in this speech that hit me the hardest not in a bad way, was when President Clinton said attempting to speak for Martin King, "I did not die to stop the violence from white people onto black people only to see black people killing other black people. I did not die to see that." And if you are an African-American I believe that's got to hit home that yes they've made progress, but we are still not at the mountaintop where Reverend King wanted African-Americans to join him.
Posted by Erik Schneider at 1:12 PM No comments: