A short but sweet video, I guess. I like the woman, but it would’ve been nice to of gotten a better look at her face. And even more so I liked her outfit. She basically looked like a rocker or biker chick with the leather jacket and leather jeans.

So this woman wearing a sexy outfit, but this video was just too short for me and would’ve liked to of seen at least a two-minute video of this woman in this outfit.
Posted by Erik Schneider at 4:36 PM No comments: 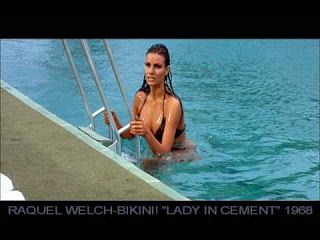 Source:20th Century Fox- Raquel Welch, Swimsuit Edition.
Source:The Daily Press
"Raquel Welch Bikini Slideshow Lady In Cement 1968."
From Mark Blue
Here you can see Hollywood Goddess Raquel Welch in the pool in her bikini, as well as out of the pool in her bikini, with The Chairman of the Board Frank Sinatra as just an innocent spectator. Raquel is a good actress and I believe an excellent comedian as well, but let's face it: her Goddess features and voice are always the the first things that people (perhaps especially guys) notice about her.
“Tony Rome (Frank Sinatra) is a Miami based detective who while diving in the ocean finds the body of a young woman. He is hired by Waldo Gronsky (Dan Blocker) to find her killer. Tony has to sift through a stack of suspects, plus trying to elude the Police. Written by Kelly.”
From IMDB

Lady in Cement is actually a very good movie. Very funny as Frank Sinatra movies tend to be, because he was a very good comedic actor with a very good off the cuff sense of humor. This movie also has a lot of good action scenes in it as well and a hell of a cast.
But take Raquel out of this movie and they would have to replace her with another goddess who if she isn’t as hot, sexy and adorable as Raquel, she would have to at least be in her ballpark.
Someone like Jill St. John who was in the first Tony Rome movie. (Any guesses on what the first Tony Rome movie was called) An actress like Raquel Welch brings guys to movies by herself. Because she’s so hot and sexy and adorable and that voice and yet she can also act as well.
Raquel and Frank are twenty-five years apart in real-life and perhaps in this movie as well. And yet the Raquel character Kit, is attracted to Tony Rome, because he’s Frank Sinatra. Well, actually because Tony Rome is a very charming intelligent funny smart-ass, who is very good at his job.
Rome is attracted to Kit as well, because, as if you don’t know the answers to that! But he needs her for the case he’s working on and she knows men that might have something to do with the murder he’s investigating. If not did the murder themselves and he uses her to get to them, as well as please himself.
Kit also tries to use Rome to get him to investigate someone else, with Rome telling her: “When I want it, I’m not going to trade for it.” With Kit calling Tony a bastard. You can tell that they’re very attracted to each other in this movie, but that Rome has a job to do and that is what he concentrates on. And it’s a very entertaining movie.
Posted by Erik Schneider at 3:48 PM No comments: