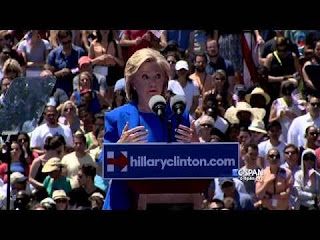 Hillary Clinton, finally found her vision and theme for running for President. Which is to create and build an America where all Americans can succeed. Where everyone who plays by the rules, works hard and is productive can make it in America and live in freedom and security. Unlike Senator Elizabeth Warren, even though this speech did have some progressive populist themes in it, it was much more positive. And not talking about the rules are rigged just for the wealthy, or corporations and the rich are screwing the rest of America. But instead talking about an America where everyone can do well if they work hard and are productive.

By talking about how the wealthy have done so well, while the rest of the country is still struggling, but at the same time talking about an America where everyone did better and well, which was the 1990s, she offered a contrast and vision from the neoconservative trickle down supply side economic policy of the Republican Party right now. The theory supply side being that if you cut taxes and regulations for business’s and the wealthy, somehow that will benefit everyone else. That theory has never been proven to work, but that is still the main Republican economic policy. And she was able separate from the Sanders/Warren social democratic wing of the Democratic Party that wants more taxes and social programs for everyone to close the economic gap.

What Hillary did, was separate from both the Tea Party and Reagan Republican wing of the Republican Party and the Sanders/Warren social democratic wing of the Democratic Party. And carve about a big area where most of the rest of the country is in between. Not a centrist message, but a message and vision of her own. That says government can’t do everything for people, but it can’t do nothing. That it should focus on people who are struggling and empower them to be able to do well in America. Get them the tools to do well. With traditional Liberal Democratic policies of individual initiative, education, infrastructure and economic development. So everyone can do well in America and I think she hit out of the park.

Posted by Erik Schneider at 3:31 PM No comments: