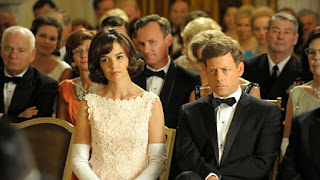 This piece was originally posted at The Daily Review: Reelz Channel: Steve Patterson- The Kennedys in Culture

The Kennedys, which I don’t believe was a great mini-series, but it was a very accurate series about The Kennedys. And showed Jack, Bobby and Jackie, for what they were. Not for how their followers want to view them as, but as they were. Jack Kennedy, as this very intelligent man, with a great sense of humor, whose Center-Left liberal politics which was probably ahead of its time back then, but I believe fits in perfectly where America is now. Who was a very hip and even cool man especially for his time, but still looks great today. But who at times had difficult even walking and physically was a very frail man with a serious back condition. Who was never made to be a husband and could never be happy with just one beautiful women.

They showed Bobby Kennedy as the tough bulldog who would have jumped out of an airplane without a parachute for his brother Jack. Who was a bit idealistic compared with Jack’s realism, but who also bring Jack back when he was lacking in confidence and not sure what the right course was to take. The Bay of Pigs fiasco is a perfect example of that where he encourages the President to admit he was wrong and to apologize for it. They showed Jackie as a beautiful adorable stylish women that she was, as if Cutie, I mean Katie Holmes is capable of playing anyone else. Who wanted Jack to be her full-time husband and hated his cheating. They showed Joe Sr. as the tough champion for his family who would do anything for his kids other than let them fail and succeed on their own.

At least one of these episodes is somewhat slow and almost wants at least me to turn the channel. Like the episode involving Rose and her mental retardation. Rose, was the Kennedy daughter who doesn’t have much if any impact on American culture, or politics at all. But that episode gives you an idea what Joe would do for any of his kids. But still, she’s not even a minor player compared with the rest of the Kennedy kids. The 1960 presidential election, the 1946 House election, the 1952 Senate election, the Bay of Pigs episode, the civil rights story, the days leading up to the assassination, President Kennedy’s womanizing, these are all the good stories. In a very good mini-series about the Kennedy Family.

Posted by Erik Schneider at 1:34 AM No comments: