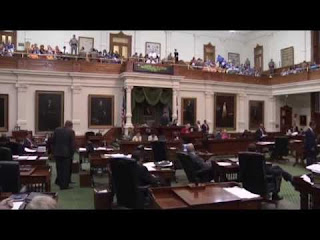 Texas taking a stand for big government and involving big government into the lives of women’s health care in Texas. I’m not pro-abortion as much as the Religious-Right might want to label people who are pro-choice as pro-abortion. And I hate that term pro-abortion, because it doesn’t exist. There aren’t people who are pro-abortion. What I am is pro-choice and pro-choice generally and not just as it relates to abortion. But I’m in favor of individual choice and freedom broadly as long as people aren’t hurting innocent people. People being those of us who’ve been born and not waiting to be born. Now I do not want to be forced to pay for someone else’s abortions and I’m not in favor of public funding of abortion. We do not have a constitutional right to that. But we do have the right to privacy and the freedom to live our own lives and govern ourselves. Not other people, but govern ourselves which is why this Texas abortion law will be ruled unconstitutional as inconsistent with Roe V. Wade.

Posted by Erik Schneider at 5:57 PM No comments: