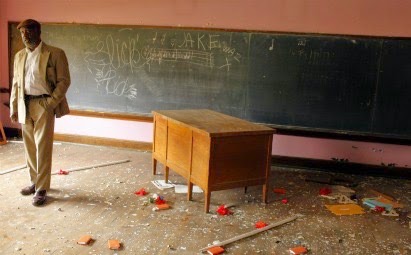 This post was originally posted at FRS FreeState on WordPress

For the United States to succeed long-term and for us to ever get our poverty rate down to at least a more competitive level with our developed competitors, instead of twice as high, or to get our level of poverty down to where our normal rate of unemployment is, we simply are going to have to have better public education in this country. And get back to being in the top ten in education in the world where we were twenty thirty years ago instead of 39th. And being towards the middle of the pack with our competitors. Being ranked with small developing countries like the Baltic Republics.

For this to happen we simply our going to have to stop sending our students to school based on where they live. And instead send them to school based on what’s the best school for them. And that means things like public school choice and charter schools especially for our low-income students and even empowering their parents to go back to school. To finish their education so they can get good jobs as well. Stop paying teachers based on how long they’ve been teaching and instead pay them based on how well their students are learning.

And hold our teachers and their students accountable for the jobs that they are doing. Like we do in practically every other profession. And stop promoting kids to the next grade level based on their age and instead based on how well they are learning and what they know. Can they read and write and so forth at the next grade level. And we need to stop funding schools based on where they are located and instead fund based on what they need to serve their students and staff well and do a good job. That means another revenue sources to go along with the property tax or replace the property tax.

So low-income schools have the resources that they need to be more competitive with let’s say middle class schools. Or money that could be used to pay good teachers more. And retrain low-performing teachers. But what public school choice and charter schools do is give parents and students the choice to go to what’s the best school for the student. And not based on where they live. And that means if a school is not doing very, well they are going to lose students. And forces public schools to compete with each other to make the public school system as effective as it can be.

There’s not a lot of things I would spend more money on at the Federal level. But public education, job training and public infrastructure would be the areas I would spend more money. But not to fund a failing system. But I would reform the system to improve and then invest more in an improving system. So we have all the resources that we need to see that everyone in the country has access to life long education.

Not just K-12 or even just through college, but as working adults as well. No matter their income levels. So we all have the opportunities that we need to be successful and live in freedom in life. And not be dependent on government, because we didn’t have access to a good education. And that’s what education reform looks like from me. And the liberal way to reform education and job training in this country.

Posted by Erik Schneider at 3:15 PM No comments: