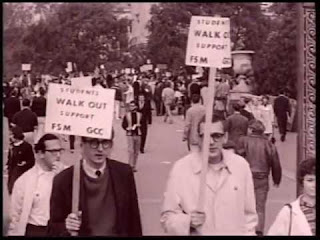 I hate as a Liberal hearing California being called a liberal state and some bastion of liberalism. And just go back to the 1960s and how they came down on students who were simply looking to express their free speech rights on campus and get involved in politics. If you go to the last ten years or so and they were one of the first states to pass a same-sex marriage ban and I believe they had at one time a ban on homosexuality, at least as it relates to sex. Ronald Reagan, was Governor of California there and served two terms from 1967-75. They recalled a moderate Democratic Governor in Gray Davis in 2003 and replaced him with a modern Republican in Arnold Schwarzenegger.

California, even with their individualistic hippie movement in the 1960s that was based in Northern California and a certain extent Southern California, was at the heart in support of the political correctness movement, but coming from the right-wing in America. Especially at the state level in the California State Government. And trying to ban students from protesting and speaking out against the political issues of the day. Now they're reversed course and still support political correctness, but do it from the Far-Left instead of the Far-Right. And will deny right-wing speakers from speaking on their campus's and even left-wing speakers like Bill Maher, if they don't like what he has to say. His views on Islam in late 2014, is an excellent example of that.

What the free speech movement of the 1960s especially the mid 60s starting around 1963 and going through 64 and 65 and through the Vietnam War, was about was free speech. The right for American citizens who happen to be in college to express themselves on the issues. Protest in favor of equal and civil rights for all Americans and protest against the Vietnam War. The political correctness warriors back then, were on the Right. Who still believed it was 1956 or something and that all Americans looked at America and American culture and the world the same way and if there was anyone who didn't share those cultural and political views. they needed to be shut up. Which is how the New-Left in America reacts when people disagree with them on cultural issues today.

The free speech movement back then and I at least believe still does today when you look at Bill Maher and Richard Dawkins, to use as examples and you have Conservative Libertarians on the Right as well, but back then at least the free speech movement came from the Left. From people who loved being Americans and America, but especially loved the rights, freedom and responsibility that came with being an American. Like Freedom of Speech and choice, the right for Americans to be themselves. And not have to either by legal, or cultural force to live life the way that the so-called establishment believes that they should. Which is what the hippie movement and the free speech movement, gay right and so-forth. The right for Americans to be Americans which are individuals. And not clones of the establishment.
Paul Richards: The Free Speech Movement- Civil Disobedience at Berkley 1964

Posted by Erik Schneider at 5:48 AM No comments: