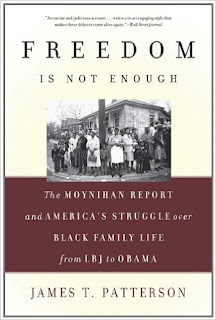 This piece was originally posted at The New Democrat: Woodrow Wilson Center: James Patterson- Freedom is Not Enough: The Moynihan Report

What I take from Freedom is Not Enough from the James Patterson book is that freedom is not free. Unless you have the skills to get yourself the job that earns you the income to live as a free person and be free from poverty and government dependence, then you’re not free. Sure! You have the right to vote, the right to assemble, speak, practice your faith, or not practice any faith, the right to self-defense and everything else in the Bill of Rights and privacy. But you don’t have economic freedom and the right to self-determination. Because your lifestyle and well-being is either partially, or completely dependent on what government will give you through public assistance.

Conservatives like to argue that what people in poverty need is freedom. That government should get-out-of-the-way and let the so-called free market take it’s course. But how is someone who didn’t even finish high school who has a couple of kids, maybe three kids and doesn’t have the education to get themselves a good job that brings her and generally we’re talking about mothers when it comes to single-parents, but not all cases. But how are single-parents under these circumstances suppose to live in freedom. They’re not going to be able to in many cases to be able to get a good job, because they’re under educated, to say the least. They obviously can’t afford to go to college on their own and they don’t even have a high school diploma. And even if they can go back to school, they need someone to watch their kids.

So for freedom to be real for anyone they have the skills that gains them their freedom. It starts with a good education that gives them the skills to get themselves a good job. Then they have to get a good job that they’re qualified for. Once they accomplish those things now they have the skills that they need to live in freedom. Before that they’re not free, but dependents on the state. Having to have public assistance and will probably need private charity as well in order to just barely get by. A roof over their head, the bare-minimum as far as food for themselves and their kids and everything else. Conservatives are right, freedom is not free. It’s something that you have to earn and then work to keep so you don’t end up on Unemployment Insurance or something.

So to move people from poverty into the middle class and better, they need the opportunity to do that for themselves. They need to be able to finish and further their education, child care for their kids if they have them, to go along with the current public assistance they’re receiving. And it shouldn’t be suggested that they improve their own lives, but instead required. Along with making sure their kids are going to and staying in school and learning. As well as getting their education so they don’t end up in the same economic status when they’re adults. Again freedom is not free, you have to earn it and government should require everyone on public assistance to work for their own freedom. And then give them the opportunities to do that. Otherwise people in poverty will never be free.

Posted by Erik Schneider at 2:59 AM No comments: