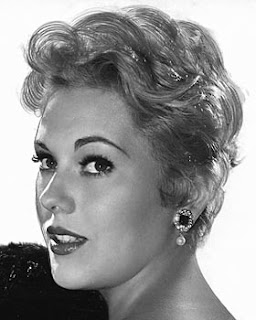 When I think of pure beauty, grace, class, realism, adorableness, Kim Novak is not the only actress I think of, but she’s certainly one of my favorites. I don’t know of another actress who was that hot, baby-faced adorable and that well-built and that real. A hot 5’6 women with a great body and whose also baby-faced adorable, who played all of her roles as if she’s playing herself. If you judge an actress by how real and believable their character is, meaning do the you believe the actress playing the women or not, that alone would make Kim Novak not just one of the best actress’s of her generation that includes Angie Dickinson, Sophia Loren, Dyan Cannon, Liz Taylor and many others, Grace Kelly, but one of the best actress’s of all-time.

And I believe what makes Kim even better is that the women that she played most of the time tended to be very different from who she is in real-life. Kim, was somewhat shy and lacking in self-confidence and never quite sure of herself. Which was perfect for her in Vertigo where she plays Madeline who is very similar in personality. But look at The Man With The Golden Arm with Frank Sinatra and she’s playing the cool always sure of herself character. Whose trying to save a drug addict and gambler played by Sinatra, from himself. Which is my point about Kim that she was so good at playing her characters even people who were very different from herself. But played them so well as if she was playing herself.

I’m not saying Kim Novak is Lauren Bacall, or Liz Taylor, Rita Hayworth, Susan Hayward, but probably in the next group, or the one right after that if not the second one. Because she sort of burned out by the late 1960s and attempted a few comebacks after that without achieving the great roles that she use to have. Had she still been doing well in Hollywood in the 1970s and 1980s, maybe we’re talking about an actress who belongs in the first group of greatest actress’s of all-time. But for her time in the 1950s through the mid 1960s she was one of the best and best looking in Hollywood. And landed a lot of great movies and roles because of that. And someone who clearly belongs in the Hollywood Hall of Fame, or the equivalent of that.

Posted by Erik Schneider at 4:13 AM No comments: