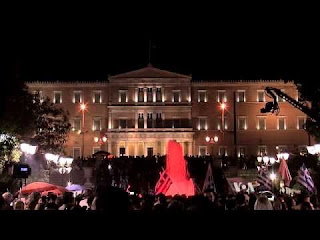 I don’t quote Margaret Thatcher very often, because I don’t agree with her on much. But one good line that she has that is very true and cuts through all the, lets say bull, is that, “the problem with socialism, is that eventually you run out of other people’s money.” That is the problem with Greece right now. They live in a society where they expect their government to do things for them that their government can’t afford to do for them. Socialism, has its place at least in every democratic developed society. But the only way socialism can work and benefit people, is to have a strong functioning economy. Where most of the workforce is employed and making a good living.

And to quote Milton Friedman, who I probably agree with more than Maggie Thatcher, “there’s so such thing as a free lunch.” Socialism is not free. Everything that government does for, or to its people, comes with a price. And depending on how much government does for society, that price can be fairly steep. When your government spends half of the revenue that the economy brings in and you have a twenty-five percent unemployment rate that Greece has, you’re going to have high deficits every year and as a result, you’re going to pile up high debt. Which is what is going on in Greece right now. Greece, reminds on New York City in the mid 1970s and Detroit now and in the last ten years. They’re over-promised their people. And when you’re economy goes down, you can no longer afford the generous benefits that you’ve promised your people.

What the European Union is telling the Hellenic Republic of Greece and especially Germany, perhaps the only healthy large state in Europe now, economically, is that they’re no longer going to subsidize an economy and economic system that is failing. If Greece wants the EU to continue to help them and bail them out, the Hellenic Government in Greece is going to have to get their costs and debt down. And that means moving people off of Welfare and putting them to work. And expecting more Greeks to be able to take care of themselves. And not be able to live off of taxpayers and other European taxpayers indefinitely. That Greece, needs to go back to work and get their economy going.

What Greece is saying, at least a majority of their voters, is that they are not ready to give up their democratic socialism. Even if it means they’ll be able to go back to work and take care of themselves. That why should they have to work when they can be taken care of their government indefinitely. And as a result, they’re probably going to be on their own and without the help of Europe. Because European taxpayers are no longer going to be forced to subsidize a failing economy and failing economic system that Greece has. And as a result the tough times that Greece is going through right now, are just getting started.