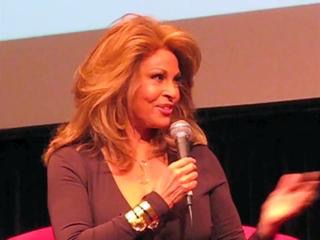 A very funny sexy baby, Raquel Welch. She’s like 72 at this point and still sounds and looks this adorable and gorgeous and the body. I mean her with those curves at this point of her life gets me to thinking that maybe there is an afterlife. And that we don’t die, but come back as something better. I think Raquel is a sexier women now than when she was in the 1970s. Especially if you look at her bootie. But we’re not just talking about a red-hot adorable sexy goddess in Raquel Welch. But a women whose a hell of an actress especially when it comes to satire. As you see with her impression of Mae West, (speaking of funny people. She has Mae down and it would have been priceless to see Mae’s reaction to Raquel playing her. I believe she would have taken it well and even made a joke about it.

Not sure if the Raquel Welch-Mae West combination was ever designed to work. If you look at Myra Breckinridge, I believe they only had one scene together anyway. Mae, came from an era that was learning how to drive basically. Where airplanes were only read about in sci-fi fiction stories. Where even radio was new where watching movies was like going to library except for a big screen in the room, because all the movies in the 1920s were silent. Raquel, is about as modern of a women as any women has ever been. Actually, Myra Breckinridge might be as modern of a movie that has ever been and perhaps 10-20 years ahead of his time. When you’re covering both open homosexuality, where queens have a big role in public in the movie. But you’re also covering transsexuality. And men who were thought to be gay, not comfortable as gay men and they become women.

Mae West, who I believe is one of the best entertainers, as well as actress’s of all-time who was hysterically funny in Myra Breckinridge, had to be impressed with Raquel Welch when she met her. I mean I think you almost have to be blind, death and gay not to be impressed by Raquel Welch. I actually think gay men when meeting Raquel for the first time might say to themselves, “OMG! what have I been missing all of these years? Instead of acting like a women, I could just have them instead.” A little tongue in cheek there, but that wouldn’t surprise me. Raquel and Mae, weren’t a generation apart, but at least two generation’s apart. Mae, grew up when horse carriages were still a dominant form of transportation. And Raquel grew up with televisions and movies where people actually talked to each other. So they were very different, but they made a hell of a funny movie together.

Posted by Erik Schneider at 4:11 PM No comments: