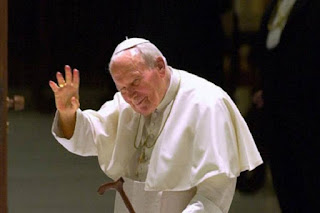 Pope John Paul is intriguing to me, because he’s someone who gave both the Religious-Right as well as Liberals such as myself, things to admire about him with all of his strong religious-conservative stances on social issues for the Religious-Right. And his call for freedom for Eastern Europeans and others which is what Liberals liked about him and escaping from authoritarianism in those slavic countries like Poland where he was from.

Pope John Paul, was a strong voice against authoritarianism, at least from the Far-Left like with communism. But like others with the Christian-Right had authoritarian views when it came to homosexuality, women’s place in the world and reproductive rights. I don’t want to say I see Pope Paul as a mix bag, because by in large I believe he was a great man. But he did has some at least very traditional religious cultural views when it came to individualism and again women’s place in the world. And not believing women should take leadership roles in the Catholic Church.

But again where I go back and forth with Pope Paul was that he was against communism and authoritarianism in Eastern Europe. Especially in the Slavic countries like his home country Poland and Russia. And what I also like about the man as a Liberal was his calls for peace and charity and helping people in poverty and assisting people in the developing world. Which is where a lot of religious conservative churches tend to be on these issues. And truly believe in the Christian value of looking after most vulnerable and assisting people in need. Which is what Catholic Charities and other Christian groups do.

Posted by Erik Schneider at 5:03 PM No comments: