The Washington Post: Editorial: Venezuela and Cuba: Partners in Repression 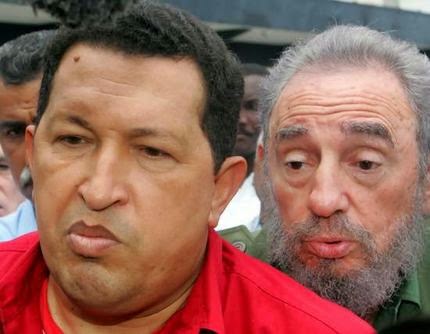 The Washington Post: Editorial: Venezuela and Cuba: Partners in Repression

Just as Cuba has started to move away from Castro Marxism/authoritarianism and have opened up their economy and at least to a small extent their country, Venezuela has moved towards Castro Marxism/authoritarianism. Which is a sad state of affairs for Venezuela a mid-size that is energy independent with a good deal of land and a lot of potential to become a developed country. If their government just freed their people and allowed for them to build that society.

The answer for America is not to cutoff economic and diplomatic ties with Venezuela, which is what we did with Cuba in the early 1960s and Iran in the late 1970s. The answer is to punish their bad behavior in conjunction with our North and South American allies. And give them incentive to improve their own behavior. So they don’t have to live under an indefinite period of sanctions like Cuba and Iran. And one way to do that is by working with the Venezuela liberal democratic opposition with our allies. So the Maduro Regime is not the only voice in Venezuela.

The Maduro Regime needs to get the message that oppression and repression and other forms of authoritarianism even in the name of socialism which is certainly not democratic in Venezuela, is not how they are going to build a developed society. And when they act in that way they need to pay a heavy price for that from America and our allies especially in South America. But in Mexico as well especially a huge country that has made it out of authoritarian and is building a developed country of their own through democratic means.

Posted by Erik Schneider at 3:34 PM No comments: