Economist's View: Opinion: Alan Krueger: The Minimum Wage: How Much is Too Much? 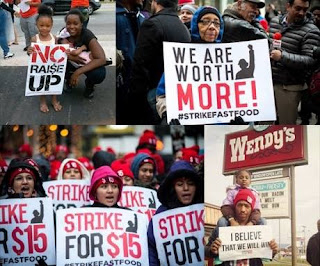 Economist's View: Opinion: Alan Krueger: The Minimum Wage: How Much is Too Much?

Good question, because how is a job where the employee bags groceries, rings up groceries, makes cheeseburgers, cleans up after people, takes orders from customers, worth. Not as much as the person who hires those people, or as much as the people who supervise those employees. In a not free, but private market economy, a lot of this is left up to the employer as far as how much their employees are worth over the minimum wage. Whatever the minimum wage should be, it can’t be so high that small employers especially simply can’t afford to pay their entry-level employees that wage. You don’t want a minimum wage that equals the amount of money of a supervisor, or a manager. Because the supervisor and manager simply has more responsibility and value to the company, then someone who is just starting with the business. Perhaps coming off Welfare and might only have a high school diploma.

I hate the term non-essential employee, because it implies that other employees are not essential. Which comes up in the minimum wage debates and opponents will say that entry-level and other lower-level employees aren’t worth much more than the minimum wage, or even worth less, because they’re not essential. Which is a bogus argument, because how would you run a grocery store with cashiers and stockers. You might not need cashiers now because customers can now ring up their own groceries, but you eliminate all cashiers, now you’re spending more money on computers. Which might be more expensive. But someone has to stock the store, work in the bakery, work in seafood, work in the deli, etc. And the store wouldn’t be open without these employees who in many cases are making 8-9 bucks and hour and that is if they have experience working there, or at another store.

The United States poverty level is roughly twenty-thousand-dollars a year, give or take. Which is about four-hundred-dollars a week for a full-time employee. The current Federal minimum wage is $7.25 an hour and if you work forty-hours a week fifty-two weeks a year and if that is what you’re making you probably don’t have vacation pay, that comes out $290 a week. Just over fifteen-thousand-dollars a year, which roughly 3-4 of the poverty level in the United States. So minimum wage employees in America don’t even make the official poverty level in America, but about seventy-five-percent of that. And again we’re talking about essential employees that without their employers couldn’t be in business and yet their employers feel they’re paid adequately. Which of course is not accurate.

I don’t know what entry-level and other lower-level workers are worth. But again their employers wouldn’t be in business without them, so that tells me they’re worth a hell of a lot more than they are. I’m not on board for a fifteen-dollar an hour minimum wage at least at the Federal level. What states and localities do is their business. But 10-12 an hour and again not a lot of money even for a full-time employee, they’re certainly worth that, because again their employer wouldn’t be in business without them. And then help small business’s with a tax credit so they don’t get hurt by it. While large employers who are clearly underpaying their employees would have to pay the full amount. And Libertarians and Conservatives will say that, “the market should decide all wages and compensation in America.” But the fact is the market doesn’t do that, but employers only with government setting basic standards for workers compensation.

Posted by Erik Schneider at 4:52 PM No comments: