On paper at least and the personal of both teams, Super Bowl 18 is definitely one of the best games you could ever have for a Super Bowl. Maybe only Super Bowl 13 with the Dallas Cowboys and Pittsburgh Steelers was a better matchup on paper and in talent and in coaching. Tom Flores, who was the Los Angeles Raiders head coach, really should be in the Hall of Fame. He had a great record in the 1980s and only Bill Walsh and Joe Gibbs won more and they’re both in the Hall of Fame. This game should’ve been a 31-24, 28-24, 35-31 24-21, 21-17 type of game with the game going down to the last possession of the game.

But the Raiders looked as prepared and executed as well as any team has ever played in the Super Bowl. On offense, defense and special teams. They had the Redskins down cold and made all the big plays in the game. When the Redskins would try something interesting or different to catch the Raiders off guard like the infamous screen pass late in the first half with the Raiders up 14-3, the Raiders pick off the pass for a touchdown. And and take a 21-3 lead into the first half, instead of it being a close game. And the Redskins looked like they had the momentum back in the second half and march down the field for a touchdown, to make it 21-9, the Raiders block the extra point.

The Raiders not only blocked the Redskins extra point attempt in the second half, but they march down the field for their own touchdown to take their biggest lead of the game at 28-9 midway through the third quarter. Tom Flores could go into the Hall of Fame from his Super Bowl 18 coaching job alone. The Redskins just looked sluggish and unprepared. They went into this game with one game plan and either didn’t figure out early enough that wasn’t going to work, or didn’t know how to adjust. Which was strange considering Joe Gibbs is the master of adjustments and retooling. 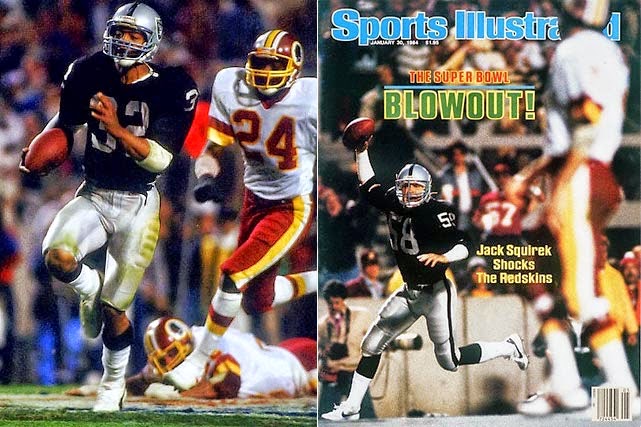 Posted by Erik Schneider at 4:16 PM No comments: