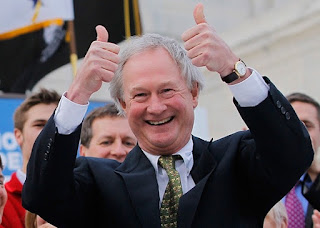 Then Senator Hillary Clinton’s 2002 Iraq War vote, is just one example of why the Democratic frontrunner for president is not a lock, or slam dunk to win the Democratic nomination. That vote of hers back then when Congress was debating whether or not to give President Bush authorization to use military force in Iraq, is just one example of why she didn’t win the Democratic nomination in 2008. And seven years later that vote looks even worst. We’re still there, Iraq is still not able to defend and take care of themselves. ISIS, which was always there, but under different names, now occupies parts of Iraq.

Commander-in-Chief, is the number one responsibility and job of the President of the United States. The President, never gets a break from that and their judgement when it comes to foreign policy and national security issues is always tested. And when you’re on the record as being wrong about perhaps the biggest foreign policy blunder, perhaps since Vietnam, that is going to hurt you. Because it goes to your judgement and goes to your judgement and knowledge about the biggest role that a President, or presidential candidate will ever have. Your judgement and knowledge when it comes to being Commander-in-Chief as President of the United States.

Lincoln Chaffee, has his own issues running for President as a Democrat himself. Being a former Republican, is just one example of that. But he can say when Congress debated and voted on the 2002 authorization for the use of force in Iraq, he voted the right way. Which was no, as a Senator and he can also say that he was the only Senate Republican to vote no on the Iraq War. Instead of being in a position where he was for the Iraq War when he was a Republican. And now that he’s a Democrat, he’s against it.

We’ll never know the answer to this obviously, but had then Senator Clinton showed some real leadership back in 2002 and said, “we’re simply not ready to go to war in Iraq and we need further study. And Congress needs further information before it makes this decision.” And decided to vote no and had taken Barack Obama seriously in 2007 and bothered to of campaign in Iowa, instead of assuming she would automatically win it, she probably not only wins the Democratic nomination for president, but gets elected president in 2008 as well. But what you do with the ball when it is in your court is the test of leadership in politics and government. How you make the calls and what you decide to do. And when of her Iraq War vote, she didn’t make a very good decision. And it could come back to hurt her again.

Posted by Erik Schneider at 4:05 PM No comments: