VOA News: Rebels with a Cause Slam Corporate Greed 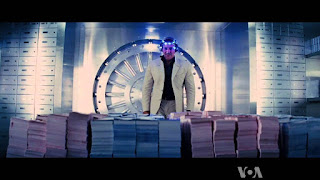 Sounds like the Symbionese Liberation Army of the 21st Century. The Symbionese from the early and mid 1970s were also New-Left if not Far-Left radicals who were fed up with poverty and corporate greed. And saw the wealthy as the main if not only culprit with these issues. And took it upon themselves to kidnap Patty Hearst, the daughter of a very wealthy California family. And would give the Patty back only if her father paid the SLA off. And then the SLA would give the money to poor people in poor Oakland communities and other towns in California.Rebels With a Cause, aren’t kidnappers, but people who also have a similar Robinhood image.

Apparently this movie was first put forward in the fall of 2011 when Occupy Wall Street came out. And they became the New-Left radicals of this decade that were going to fight against what they saw as greedy capitalism and private enterprise. If not capitalism and private enterprise all together. And fight for new wealth redistribution to tax money from the wealthy to take care of the poor. But by in large there haven’t been any terrorists linked to OWS. Just people protesting for not having permits and causing disturbances, but not actually robbing banks and taking people hostage. Unlike the SLA.

Whether you’re a fan of corporate greed and crony capitalism, or not and I’m sure as hell not as a Liberal, there ways of fighting bad things and ways not to do that. Violence, almost never accomplishes political objectives when you don’t have the people behind you and you’re just a fringe group. The way to do this is to have the people behind you and build a movement and get the resources that you need from the people behind you. And then form a protest movement to accomplish your objectives. Publish articles, put together publications about what you’re trying to accomplish and back politicians and political candidates who believe in what you want. And will then fight for it. Instead of violently trying to overthrow the system and creating new victims.

Posted by Erik Schneider at 4:24 PM No comments: