Source:The Daily Press
“Thanks to seven goals by Steve Zungul, the New York Arrows took game one of the inaugural Major Indoor Soccer League championship series, 14-7 over the Philadelphia Fever at Nassau Coliseum on Long Island on March 23, 1979. Leading just 6-5 in the third, the Arrows turned it on with a huge fourth quarter to win going away. Two days later, they would cap off the series with a 9-5 win in game two, giving New York their first of four consecutive MISL titles.”
From The Celebrated Misterk
The MISL got of to a good start in the 1979 season with the Philadelphia Fever selling out the Philadelphia Spectrum. Drawing crowds at the Spectrum that the Flyers and 76ers drew. The New York Arrows who won the MISL Finals in 1979 also drew good crowds at the Nassau Coliseum.
Arena soccer is an American sport designed for American sports fans with all the fast paced action, with teams being able to score a lot if they are that good offensively. But for goalies able to be successful as well, especially if they have a good defense in front of them. Because unlike with outdoor soccer, the rules indoors do not favor ether the defense or offense. And because of all of these factors I’ve never understood why the MISL has never been more successful in America. And even become the fifth major sport in this country.
Posted by Erik Schneider at 3:01 PM No comments:

This post was originally posted at FRS Daily Press on WordPress

The Manson girls were the female members of the Charles Manson’s family what was known as the Manson Family which was basically a cult. But it wasn’t a religious cult, but a crime cult, a crime family, a gang. They were basically a criminal gang that included murder. But also robbery and even torture to get things they wanted because they didn’t have the character to work for it or earn it. And these somewhat smaller crimes eventually led up to murder, but not random murders.

Even though the Manson Family didn’t know who they were murdering, because the people they murdered to them represented what they wanted to eliminate. Which was the establishment or the power-structure in America that the Manson Family especially Charles Manson believed were holding the Manson Family down and why they needed to come together to move away from mainstream society. Where they were failing to make it, especially Charlie who already at this point in his early and mid thirties, had already spent more than half of his life in prison in one form or the other.

And Charlie Manson just getting out of prison in the late 1960s and ending up in the San Francisco area and not knowing what to do with the rest of his life. Sort of catches onto the Hippie movement that was going on then. And saw these people or some of them as his chance to get back at society for all the things he believed were done to him. That cost him half of his life in prison and sees these young women and men late teens and early twenties who were somewhat lost and not knowing how they fit into society.

These young people struggling to make it on their own and showed them the respect and love they weren’t getting in life and formed this family or gang. And now had the soldiers he needed to get back at society. The people he believed were holding him down as well as his cult members. And ended up brining in people who otherwise would’ve been in college at that point and all had the skills and knowledge to of done very well in college and been successful in life.

In Leslie Van Houten’s case, she was beautiful and intelligent. Probably could’ve made it in Hollywood or in college and had a very successful career in entertainment or business or something had she never of met Charlie Manson and never fallen into his cult. But she made a really bad decision early on in life which led to even worse decisions later on in the Manson Family. Which can sum up the rest of the Manson Family and all of the waste that they represent. And what could’ve been had they just made better decisions in life. 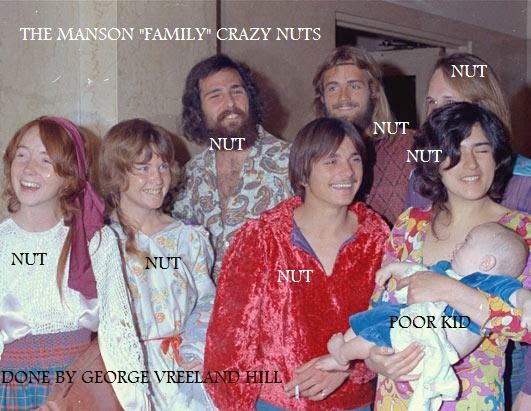 Posted by Erik Schneider at 12:13 AM No comments: