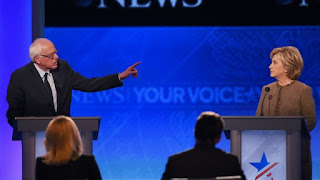 This piece was originally posted at The New Democrat: The Hill- Opinion- Bill Press: Who's The Real Liberal- Hillary Clinton or Bernie Sanders?

You want to talk about European social democracy and Far-Left socialist politics in America, or do you want to talk about Center-Left pragmatic progressive and liberal politics in America? If you want democratic socialism and social democracy, Bernie Sanders other than Representative Dennis Kucinich in 2004 and 2008, hands down is the most socialist major party candidate for president ever. You can’t out socialist and socialist especially if you’re not a Socialist, which Hillary Clinton obviously isn’t. But if you want to talk about the American Center-Left which in Europe would the Center-Right and perhaps even further right like in Germany with the Free Liberal Democrats, Hillary Clinton hands down is the real and only Progressive and in the presidential race.

This is the danger with lumping in everything on the Left into one political faction and calling everybody the same thing. Communists aren’t Liberals and neither are Democratic Socialists. Liberals are people who believe in equal opportunity, rights and justice for all and individual freedom for all based on the liberal values I just mentioned. Not a big government big enough to manage people’s lives for them. Bernie Sanders and other Socialists go much further than that and say that individual freedom and rights are not enough. And believe in welfare rights based around a big centralized welfare state and that people have a right to essentially to not be poor and be taken care of with their money by government.

So of course Hillary Clinton is more progressive than Bernie Sanders, because she’s not a Socialist. The test to see who is more progressive than the other is not this inside the beltway game about whose the furthest left. But who has stronger progressive values. Who has a better record in seeing that those values become law and come into being. Not whose going to tax and spend the most, but whose going to accomplish the policy objectives that Progressives believe in. And again hands down and even though Hillary Clinton’s only service in Congress was her eight years in the Senate which is less than a third of Bernie’s time in Congress and Bernie is in his 26th year in Congress and served in the House before the Senate, Hillary has a better record of accomplishing progressive objectives. Which is why she has so many more endorsements from actual Progressive Democrats. Like from House Assistant Democratic Leader Jim Clyburn and I could go on.

Posted by Erik Schneider at 3:41 AM No comments: