Fusion: Daniel Rivero- An O.J. Simpson Trial Refresher For 90s Kids: A Look Back at The Trial of The 20th Century 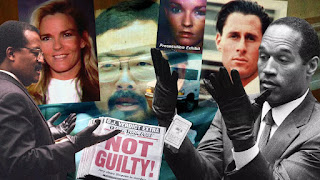 This piece was originally posted at The Daily Review Plus

Just to give you a little background of myself, I was eighteen in June, 1994 and about a week out of high school after graduation vacationing with my parents in Delaware. So I guess technically I didn’t count as a kid then, because I was one of the youngest adults from Generation X. Actually, more than twenty-years later I still am. Which makes me feel a little younger now than I’m in my forties. My point being that I remember this case very well, because again as a young adult and having my first real job out of high school and actually interested in the 1994 NBA Finals that was interrupted by this bizarre case.

The O.J. Simpson case represents everything that is wrong with celebrity culture, celebrity news and the country’s obsession with it. We have Americans literally who can’t go to bed until every single text message that they have is responded to and call is returned. Or have checked every single celebrity news story online generally on their phone and have watched all of their so-called reality TV shows. The O.J. Simpson, was the start of the reality TV and celebrity news watch in this country. Where you would have networks dedicated to this, well stuff. (To keep it clean) NBC, breaks into NBC Sports that was covering the NBA Finals in 1994. Arguably the biggest event in sports that year. With NBC News, not to cover even a plane crash, or some terrorist explosion, but a car chase that happened to have a celebrity in it that was suspected of murder. We didn’t have that type of national coverage before 1994.

We had a twenty-four cable news network that dedicated all of their coverage each day during this trial not to coverage of the 1994 mid-term elections that saw House Republicans win the majority for the first time since 1952, or how would Democratic President Bill Clinton work with this new Republican Congress that controlled the House and Senate, or the Oklahoma City bombing, or what was going on in the Balkans with Europe and America, about to get involved there, but again this bizarre celebrity crime trial. That looked more like a Hollywood crime movie than a real-life murder trial. Pre-1994, CNN actually stood for Cable News Network. Before it was changed to the Celebrity News Network. (Ha, ha)

Of course we’ve always had celebrity news and celebrity news coverage and even tabloid news and I’m a big movie fan myself especially classic movies and like bios of my entertainers. But pre-1994 average Americans had lives outside of their celebrity news world and reality TV. They wouldn’t run to the nearest TV and to find out how juries ruled on cases, or skip work to follow murder cases. The O.J. Simpson case, must have been a boom for the brand new internet, that had only been around for a couple of years at this point and started becoming big and more universal in 1994 and the same with cell phones. All because one of the most famous sports/movie celebrities was on trial for murder.

And by the way we’re talking about a very interesting case here and I’m not denying that and denying that it should have been covered. But that is what Court-TV was for and what E is for and perhaps A&E and other entertainment networks. My point is that when you have hard news organizations like CNN and NBC News, dedicating all of their coverage essentially, or at least marathon sessions of it, you’re saying that important news is not real news is not as important, because it doesn’t help the bottom line as much, or that Americans are pretty stupid and have nothing better to do with their lives. Which is too many cases is very true. That news organizations are not so much reporting important hard news, but reporting on things that drives their ratings.

The O.J. Simpson trial, was a gift to Hollywood. They couldn’t have come up with a better soap opera or mini series on their best marijuana high, than what they got from O.J. Simpson, his star power, the people he was involved with and of course how he butchered two innocent people in the prime of their lives and then got away with it. At least in the short-term. Life has been hell for him as it should almost every moment since. But that is what you entertainment networks for to cover these stories. That is what cable TV, but not cable news is for. To cover cases that Americans who have too much time on their hands and not enough going on in their lives, who have the time to follow these stores will watch. And leave hard news organizations for covering real news.

Posted by Erik Schneider at 4:12 AM No comments: