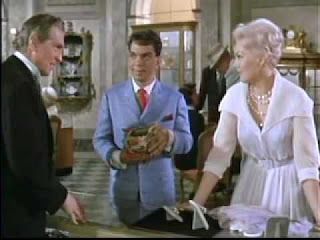 Pepe meeting a Goddess. Not just any Goddess, but Goddess Kim Novak. Which would be like meeting Queen Nore from Jordan, or some gorgeous adorable Goddess like that. A women who when you see her at least for the first time, your brain goes blank. Because your eyes and what you’re thinking about what you’re seeing, simply overwhelms the rest of your brainwaves. Kim Novak, the Goddess who cut her own career short. Because she’s a somewhat shy, perhaps even aloof women, who never saw herself as good as the people she worked for, worked with and who wrote about her. And thought she would be happier doing other things.

And here Kim is in this scene, (I imagine playing someone else) who sees a very charming cute little Latin fellow. Whose new to America and wants to buy his girlfriend a very expensive gift that he can’t afford. He’s in luck, because he not only meets a blonde Goddess, but a very sweet and not just physically, Goddess who is also very generous. And just happens to run the jewelry store that Pepe is at. And decides that he’s worth her generosity and gives him a fat discount on the ring for his girlfriend. The gift of a lifetime for this man and many other men. Which goes to show you that some Goddess’s actually are sweet as they look. Kim Novak, a hot baby-faced adorable Goddess, who personally is as sweet as she looks.

Posted by Erik Schneider at 5:34 PM No comments:

“San Francisco, California, USA. 21st Nov, 1988. San Francisco 49ers vs Washington Redskins at Candlestick Park Monday, November 21, 1988. 49ers beat Redskins 37-21…
From Alamy
“The 1988 San Francisco 49ers”
From Lafayette Catfey
The 1988 San Francisco 49ers might be the most consistent inconsistent Super Bowl team of all-time. The 2012 Ravens might be close though, but the 88 49ers were a 10-6 team that on paper looked like they could’ve easily won 12 or 13 games. But 10-6 teams tend to be somewhat inconsistent and have great stretches followed by poor stretches. Otherwise they don’t lose six games and just barely win their division. But win their division going away, unless they play in a great division.
The reason why the 88 49ers struggled and had ups and downs, was their offense sputtered and were up and down. They had two starting quarterbacks that year, because Joe Montana was hurt in the season. So young but somewhat inexperienced Steve Young who would also go on to be a great Hall of Fame quarterback, was given the chance to be the 49ers starting QB. But Young was up and down as well and committed too many turnovers. The only consistent thing about the 88 49ers, was their defense which was usual in the 1980s was one of the best in the NFL.
The 1988 49ers are the perfect example of why their soft finesse label didn’t stick and was never accurate. They were about as strong and physical on defense as any team in the NFL in that decade and 1988 and Super Bowl 23 is a perfect example of that. They shut down the Cincinnati Bengals power ball control offense that moved the ball down the field and scored against everyone else in the league. And won several blowouts, but the 49ers stuffed Icky Woods, James Brooks and their running game and held them to 16 points.
The 49ers offense got hot late in the 88 regular season and that carried through the 1988 NFC Playoffs, but only RB Roger Craig and WR Jerry Rice and perhaps their offensive line was consistent during that regular season. But their defense was very good the whole season and dominated the 1988 NFC Playoffs against the Minnesota Vikings and Chicago Bears and dominated the Super Bowl. Which is how a 10-6 inconsistent team can win the Super Bowl. You have something that carries you through the regular season, get hot late and carry it into the playoffs and win the Super Bowl.
Posted by Erik Schneider at 2:52 PM No comments:


This post was originally posted at FRS FreeState on WordPress
So to sum up where the drug warriors are now when it comes to the War on Drugs specifically when it comes to marijuana. Is that the War on Drugs is not working according to Margaret Hoover, but we should continue to support it anyway. Continue to support something that is not working. That makes a lot of sense, what’s conservative about continuing to support something with tax dollars that's not working. And then Margaret Hoover who I do not mean to pick on, but she lays out exactly perhaps unintentionally why the drug warriors are losing this argument.


Margaret Hoover said that "if we legalize marijuana it would suddenly be available to kids". Apparently not realizing that if marijuana were to be legalize it would be regulated like alcohol. Twenty one or over to use, possess or purchase marijuana in America. So if you think marijuana would be too available to kids in this country, you should also be looking at alcohol and tobacco. Two drugs that are just as bad or worst than marijuana and how available they are to kids right now and they are legal today.
But there’s more and just to show that I’m not just picking on Margaret Hoover, but also to show why the drug warriors are losing now.  You go to Jason Taylor in the video who says that "if we legalize marijuana, heroin and cocaine would be next". Even though there’s no polling data that supports legalizing heroin or cocaine in this country. Except for maybe when it comes to cocaine and heroin dealers. Mr. Taylor use to play for the Miami Dolphins so perhaps, he met a few of them in South Florida. And that's why he made that point.

In another brilliant statement Taylor made had to do with "if we can’t successfully fight drugs in this country, why don’t we just legalize bank robberies because we can’t stop bank robbers". It's similar to the people who are against gay marriage who say "if we allow men to marry men and women to marry women, what’s next men will be allowed to marry their children and the same thing with women". When there’s no polling data thats shows any serious support for any of these things.
This is why I believe the marijuana legalization argument as well as the gay marriage argument is no longer liberal vs. conservative. It's no longer Left vs. Right even because now we have leftists and rightists who support marijuana legalization and gay marriage. Or at least allowing the states to make these decisions themselves.

Liberals and Progressives on the Left who support marijuana-legalization. And Conservatives and Libertarians on the Right who support it. People who believe these decisions are about freedom and individual choice vs prohibitionists on the Left and Right who are against it even though they are now struggling to explain why.

Posted by Erik Schneider at 1:33 PM No comments: