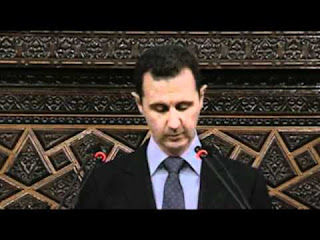 Source:Associated Press- Bashar Al-Asasd: Baathist President of Syria.
"Syria barred a string of U.S. and European diplomats Tuesday, saying they were "no longer welcome" as the country plunged into its most profound international isolation in decades."
From Associated Press
It’s a good thing that both America and Europe are pulling their diplomats out of Syria for diplomatic as well as for security reasons. Looks like the Assad Regime is preparing for war, as they should be if they want to stay in power. And of course they do and be the most authoritarian regime in the Mideast. This government is worst than the Islāmic Republic of Iran, which is an Islāmic theocracy, that of course is sexist towards women. President Assad is not interested in being President of Syria, that’s just his title. He’s interested in ruling over his people. Which is different.

The Assad Regime is more of a terrorist organization than a government. It’s more of a police state, than a government. They will allow you to live in what they claim is their country for a price: that you do exactly what they want you to do, you live under their code of conduct and live up to what they believe a Syrian should be. And the West looks like is finally waking up to that and the Syrian people are finally fed up about that and are literally now fighting back about it and it’s only a question of whether the Arab League and the West are going to help them fight back.

I wrote two blog posts last week arguing that the United States needs to stand for the Syrian people. Not calling for an invasion of Syria. No one in their right mind is, but there are other ways to assist people fighting for their freedom, without invading their country and risk killing innocent people. It could even happen short of a no fly zone, with things like military aid, weapons, food, humanitarian relief, blockades, preventing money from leaving the Assad Regime. And going to the Assad Regime, along with other sources, things we should’ve been doing for months.

We could be empowering the Syrian rebels to take the fight to the Assad Regime, but without doing it for them. Telling them that if they want their freedom, they have to go take it from President Assad. The old guard so to speak, is not going to go down without a fight, as we saw in Libya and of course as we are seeing in Syria.
It’s good that the United States and Europe are pulling their diplomats out of Syria, to prevent them from going through any possible future violence. And this might be a sign of what’s to come, that the Syrian rebels are ready, or are preparing to go on the offense. Hopefully with the backing from the West and we will be able to eliminate another authoritarian regime in the Mideast.
You can also see this post on WordPress.
Posted by Erik Schneider at 1:34 PM 1 comment:

The Onion: 'Week in Review'


Source:The Daily Press
"Straight and gay service members are looking forward to asking and telling, scientists believe the recent heat wave may have been caused by a massive star at the center of the Solar System, and Bristol Palin reveals that her mother has had 15 abortions. It's the week of August 8th, 2011."
From The Onion
Republican presidential nominee Mitt Romney announced today that he will clone himself again, to make himself look like a woman. Along with undergoing plastic surgery to make that happen, to better reconnect with female voters. But canceled those plans, after being told by Christian-Conservatives that they wouldn't vote for a woman for President. The ironic part of this, that a lot of those voters are women as well.
In a press release from the Romney Campaign, they announced that already managing four clones, Conservative Mitt, Liberal Mitt, Moderate Mitt and Neoconservative Mitt, would be too much to handle. To go along with a Female Mitt.
Also in the news: Vice President Joe Biden  announced that Mitt Romney was more qualified to be President of the United States, then himself. But in the next sentenced announced that Mitt would make a worst President than George W. Bush. Apparently Vice President Biden forgot to take his medication. His wife Jill Biden announced that her husband is back home in bed now. And will only be allowed to leave the house, with tape wrapped around his mouth, to prevent him from speaking.
That's your week in what didn't happen. For more information on what's not going on in the world, I suggest you become a die hard viewer of Fox News or reader of The Onion to find out how the world doesn't work.
Posted by Erik Schneider at 5:19 AM No comments: