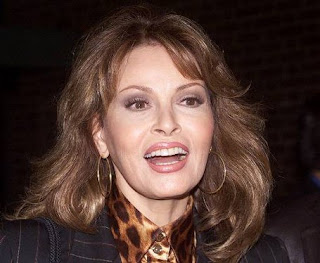 This piece was originally posted at The Daily Review: Drew David: Barbara Walters Interviews of a Lifetime- Raquel Welch in 1985

Raquel Welch by 1985, was not the big star in Hollywood that she was in the early and mid 1970s, but she was still a big star. Who could find work easily and didn't have much if any trouble staying busy. She was 44-45 at this point and as you can see you still looked great. Even with the short hair, but take it up twenty-five years later to 2010 the year she turned 70, she was still red-hot and baby-faced adorable as a seventy-year old women who was collecting Medicare and Social Security. But that is Raquel Welch. She's said several times before that she sees part of her job to look great all the time. To take care of herself which is what she's been doing ever since she came to Hollywood in the 1960s.

Raquel, isn't a Hollywood goddess because she was born with a great face and body and hair. Those things are obviously part of it, but the real reason is because she's a true professional. She takes care of herself and does projects that makes her look great. And by the mid and late 1970s I believe we finally got to see Raquel as the actress and entertainer, doing roles that showcased her talents as a singer and as a comedian. Myra Breckinridge, whatever you think of the movie and I love the film, she was great and very funny in it, but go up to 1977 with Mother Jugs and Speed, where she uses all of the sexual talk about her and plays off of it and throws it back in those guys face. To show them how they sound, you see the great comedic timing, ability and improvisation of her as well.

Raquel Welch, is a true Hollywood goddess, because yes she's physically a goddess, but you need more than that otherwise you're going to burn out at a certain point when you're no longer considered fresh. The reason why Raquel stands up from lets say Hollywood playmates and even bimbos, because she has real talent as an actress and entertainer. She's a Golden Globe winner and has worked on Seinfeld and done other TV roles mostly in comedy. And has done more TV in her seventies as well. You don't last this long in Hollywood if you can't do the job. Play the parts that are given you, or even have the ability to create parts for yourself if you don't like what's coming your way. Raquel Welch, is built to last and when she turns 80, she'll probably still be seen as a Hollywood goddess.

Posted by Erik Schneider at 4:00 PM No comments: