What I like about President Obama's second inaugural address is that it was about limited government. And about what is right with America and how we should use these things to fix what's wrong with America. That individual freedom should always be protected but that all Americans should all have access to the same freedom. That most of the country has and that it wasn't a mushy middle of the road speech designed not to offend. Anyone and hopefully not remembered by anyone but that he gave the country and idea of what his philosophy is. That its not government centric but that we do need government to do certain things for us so we all have access. To the same freedom, that we can't defend the country individually or build our own roads and schools. And so fourth but that as a country we need to do these things and thats where government comes in. Not to run our lives for us or to take responsibility away from us and give us the freedom not to think or make decisions. That we still have to live our own lives but that government comes in to do the things that individually we can't do for ourselves.

I was hoping to hear a new line like "not ask what your country can do for you but what you can do for your country". From President Kennedy in 1961 and with President Clinton in 1993, "there's nothing wrong with America that can't be cured with what's right with America". But thats fine you don't have to have lines like that in an inaugural address but what we did get from. President Obama was a speech that was about individual freedom but individual freedom for all. For all Americans and not the special few and that we need good government thats limited to do the things. For us that we as individuals can't do for ourself and we heard what President Obama wants to work on in the future. In the areas of civil rights for homosexuals, immigration reform, reforming our voting laws, energy policy and so fourth. Which is plenty to do in just four years especially since these were goals in his first four years.

If this was my speech given today it would've been all about freedom for all and not just for the few. And then layout how we accomplish this, what would be the best system that would allow all Americans. To have the same freedom to be able to live their own lives and make their own decisions and not be discriminated. Against for reasons that have nothing to do with whether they are good people or qualified or not. And the President hit some of those themes but I would've gone further.
Posted by Erik Schneider at 1:47 PM No comments: 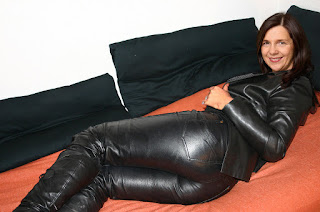 This piece was originally posted at FRS Daily Press: Boots In Leather: Outfit of The Day-Black Leather Jeans & Patent Boots

I love jeans and boots on sexy women. That is women with bodies who aren’t skinny or fat, but well-built and put together. Healthy looking women who don’t vomit even at the sight of food, or don’t stiff their faces in every plate of food that they see. Except when that plate of food is a salad, of course. Jeans and boots whether they’re denim jeans and boots, which is by far the most common jeans and boots look, even in Europe, or leather jeans and boots which is more common in Europe and America, like french fries or fried potatoes with cheeseburgers. Kareem and Magic, Jordan and Pippen, to use sports analogies, he perfect combination. Cherry pie with vanilla ice cream, would be another good one. Because you take a sexy stylish pant like skinny denim or leather jeans and then combine them with style footwear. That is not too formal and yet adult so you don’t look a high school kid who only wears jeans and sneakers even when they go out at night. Or have dinner with the family. It’s a sexy adult stylish way for women to dress, especially with a stylish top. Which is why jeans and boots and to a certain extent leather jeans and boots when they’re dressed up, are common at the office now.


Posted by Erik Schneider at 6:10 AM No comments: