The Film Archives- C-SPAN: John Kerry- How do You Ask The Last Man to Die For a Mistake 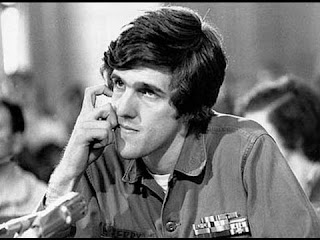 Its been said that presidents who have military or foreign policy experience, are less likely to commit American troops to combat in foreign nations, than presidents without that previous experience. Because they know exactly what they are putting those troops through and what they have to go through. And the sacrifices they and their families will make as a result and perhaps even the ultimate sacrifice they may make. I'll give you a perfect example of that. When Dwight Eisenhower became President in 1953, one of the first things he looked to was to get American troops out of the Korean War. Because he saw it as a civil war.

Ronald Reagan a World War II veteran, never committed American troops into combat. We never went to war in his eight years as President. Jimmy Carter, another World War II veteran, never committed American troops to combat in his four years either. President George H.W. Bush did commit troops to the Gulf War in 1991. But for a very limited mission. Get Iraq out of Kuwait, not to invade and occupy Iraq. A big country of twenty-five million people, a mistake that his son wasn't able to avoid twelve years later.

President George W. Bush, who never had combat experience, or foreign policy experience. Other than signing up for the reserves to avoid Vietnam service, commits American troops to two wars within seventeen months as President. In Afghanistan and Iraq. Two wars we are now trying to get out of ten years later. We'll never know what type of president John Kerry would've made on foreign policy, or anything else. And I believe thats unfortunate, because we are talking about a Vietnam veteran from the Baby Boom Generation. Who volunteered to serve his country in Vietnam, unlike George W. Bush who did everything he can to avoid service there.

But when you here Senator Kerry talk about foreign policy as Chairman of the Foreign Relations Committee and as a senior Senator, you know that he doesn't take these things lightly. And committing American troops to any war is a huge deal and shouldn't be taken lightly. And when he here presidential candidates who have no decisions to make as candidates as far as what we should be doing as a country when it comes to foreign policy and they talk about a potential war with Iran, kinda lightly like committing troops to an operation, "like this is really not that big of a deal", as you saw Senator Kerry on his Senate floor speech about an editorial that Mitt Romney wrote in the Washington Post today, you know the difference between someone who knows what they're talking about, because they've been there and someone who doesn't, because they haven't.

Where Senator Kerry criticizes Governor Romney's editorial criticizing President Obama's policy on Iran, I know as someone thats never served my country in the military or foreign service, that talking about committing American troops to any type of foreign wars is a huge deal. And shouldn't be taken lightly and what people say on the campaign trail and what they can do once they get to office are two different things. And that its easy to talk tough on the campaign trail. But once you're actually in office, its a much different story.

Posted by Erik Schneider at 5:21 PM