Public Resource: 'We Work Again 1930s'- The Legacy of The New Deal 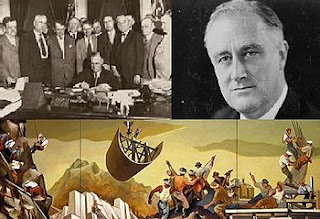 The New Deal, a monster that Libertarians and Conservatives would probably describe the New Deal as something they would like to tear down and perhaps start over with more of a free market approach. The American safety net that Liberals such as myself would like to reform and bring competition to it. Instead of the centralize Federal Government approach to how the New Deal was designed. And a gift from God, well actually a Gift from FDR as Progressives would probably describe as.

Something today's Progressives would like to protect and then expand and go back to the centralize big government approach. To solving problems in America by taking people's money and using it to take care of them. And create what they would call the Fair Deal. Something that President Harry Truman tried to create in the 1940s. With things like national health insurance and health care. Wherever your on the political spectrum, from the Far-Left to Far-Right or somewhere in between, where most Americans tend to be, if you're aware of the New Deal, chances are you have strong feelings about it.

The last two years we've basically been debating the New Deal in America and the role of government. Especially the Federal Government and exactly what the Federal Government should be doing. What should we do with Social Security in the future, as well as Unemployment Insurance. And how we should assist unemployed workers. And should everyone who pays into Social Security, be able to collect Social Security. Or should it be a Welfare Insurance program like Unemployment Insurance. Is 65 still the right retirement age, or should we move that up, especially for white-collar workers.

A lot of the New Deal had to do with how the assist the poor in America. And almost eighty years later we are still having that debate, like with Welfare Insurance. The New Deal at least in some form will always be around in the United States. The only question is how it will look but it will never look how it was designed. Because a lot of it is outdated, especially as it relates to Unemployment and Welfare Insurance. Where those programs were never originally designed to put those people to work. But just give them some income to survive and the question is. How will these programs be reformed in the future. But they will be reformed.

Posted by Erik Schneider at 5:32 PM